To demonstrate the ease with which power can be used to coerce people, Stanley Milgram conducted a scientific experiment that demonstrated how far people will go when confronted with someone who has power and is in a position of authority. In this instance, subjects often performed actions that were unethical when ordered to by a person in authority. Milgram’s experiment demonstrated the power of authority and how someone in a position of authority can influence people to behave unethically and against their wishes.

Milgram’s Studies on Obedience to Authority

The powerful ability of those in authority to control others was demonstrated in a remarkable set of studies performed by Stanley Milgram (1963). Milgram was interested in understanding the factors that lead people to obey the orders given by people in authority. He designed a study in which he could observe the extent to which a person who presented himself as an authority would be able to produce obedience, even to the extent of leading people to cause harm to others.

Like his professor Solomon Asch, Milgram’s interest in social influence stemmed in part from his desire to understand how the presence of a powerful person—particularly the German dictator Adolf Hitler who ordered the killing of millions of people during World War II—could produce obedience. Under Hitler’s direction, the German SS troops oversaw the execution of 6 million Jews as well as other “undesirables,” including political and religious dissidents, homosexuals, mentally and physically disabled people, and prisoners of war. Milgram used newspaper ads to recruit men (and in one study, women) from a wide variety of backgrounds to participate in his research. When the research participant arrived at the lab, he or she was introduced to a man who the participant believed was another research participant but who was actually an experimental confederate. The experimenter explained that the goal of the research was to study the effects of punishment on learning. After the participant and the confederate both consented to participate in the study, the researcher explained that one of them would be randomly assigned to be the teacher and the other the learner. They were each given a slip of paper and asked to open it and to indicate what it said. In fact both papers read teacher, which allowed the confederate to pretend that he had been assigned to be the learner and thus to assure that the actual participant was always the teacher. While the research participant (now the teacher) looked on, the learner was taken into the adjoining shock room and strapped to an electrode that was to deliver the punishment. The experimenter explained that the teacher’s job would be to sit in the control room and to read a list of word pairs to the learner. After the teacher read the list once, it would be the learner’s job to remember which words went together. For instance, if the word pair was blue-sofa, the teacher would say the word blue on the testing trials and the learner would have to indicate which of four possible words (house, sofa, cat, or carpet) was the correct answer by pressing one of four buttons in front of him. After the experimenter gave the “teacher” a sample shock (which was said to be at 45 volts) to demonstrate that the shocks really were painful, the experiment began. The research participant first read the list of words to the learner and then began testing him on his learning.

The shock panel, as shown in [the figure],“The Shock Apparatus Used in Milgram’s Obedience Study,” was presented in front of the teacher, and the learner was not visible in the shock room. The experimenter sat behind the teacher and explained to him that each time the learner made a mistake the teacher was to press one of the shock switches to administer the shock. They were to begin with the smallest possible shock (15 volts) but with each mistake the shock was increased by one level (an additional 15 volts). 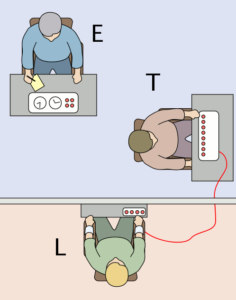 Once the learner (who was, of course, actually an experimental confederate) was alone in the shock room, he unstrapped himself from the shock machine and brought out a tape recorder that he used to play a prerecorded series of responses that the teacher could hear through the wall of the room. As you can see in [the figure], “The Confederate’s Schedule of Protest in the Milgram Experiments,” the teacher heard the learner say “ugh!” after the first few shocks. After the next few mistakes, when the shock level reached 150 volts, the learner was heard to exclaim “Get me out of here, please. My heart’s starting to bother me. I refuse to go on. Let me out!” As the shock reached about 270 volts, the learner’s protests became more vehement, and after 300 volts the learner proclaimed that he was not going to answer any more questions. From 330 volts and up the learner was silent. The experimenter responded to participants’ questions at this point, if they asked any, with a scripted response indicating that they should continue reading the questions and applying increasing shock when the learner did not respond.

Before Milgram conducted his study, he described the procedure to three groups—college students, middle-class adults, and psychiatrists—asking each of them if they thought they would shock a participant who made sufficient errors at the highest end of the scale (450 volts). One hundred percent of all three groups thought they would not do so. He then asked them what percentage of “other people” would be likely to use the highest end of the shock scale, at which point the three groups demonstrated remarkable consistency by all producing (rather optimistic) estimates of around 1% to 2%.

The results of the actual experiments were themselves quite shocking. Although all of the participants gave the initial mild levels of shock, responses varied after that. Some refused to continue after about 150 volts, despite the insistence of the experimenter to continue to increase the shock level. Still others, however, continued to present the questions, and to administer the shocks, under the pressure of the experimenter, who demanded that they continue. In the end, 65% of the participants continued giving the shock to the learner all the way up to the 450 volts maximum, even though that shock was marked as “danger: severe shock,” and there had been no response heard from the participant for several trials. In sum, almost two-thirds of the men who participated had, as far as they knew, shocked another person to death, all as part of a supposed experiment on learning.

Milgram’s study is important in a law enforcement context for the following reasons:

It is important for any person who possesses power to understand and be aware of the coercive nature of power; that power and authority are easily used to make people do things they otherwise would not do. It is within this paradigm, that abuse of power can occur, and officers must be aware of their power and the ease with which it can be abused.

The following description of Milgram’s experiment comes from the chapter “Obedience, Power, and Leadership” from the open textbook book Principles of Social Psychology: 1st International Edition. and is licensed CC BY 4.0. All references cited on this page can be found at the end of the chapter of Obedience Power and Leadership.

Ethics in Law Enforcement by Steve McCartney and Rick Parent is licensed under a Creative Commons Attribution 4.0 International License, except where otherwise noted.