The straight razor provides the closest, smoothest shave possible. It is a sharp tool that should be used with caution, as it requires skill and a steady hand.

Before we get started with the straight razor shave service, let’s first review the following topics:

During the pre-shave consultation, the barber/stylist will assess:

Keep in mind that face shape and head shape need to be considered if a partial shave is to be performed, such as a beard shave with a moustache shaping.

Note: Please refer back to Chapter 1.1 for a more in-depth explanation about the components of the consultation.

Before assessing the client’s skin and growth patterns, it is a good idea to inquire about their use of facial products and/or medications. Some medications and skin care products, such as Accutane and Retinol, can cause the skin to be more sensitive and easily irritated by the shave process. This is also the time to find out if the client has had other sensitivities in the past, such as a reaction to shaving products, an acne breakout after shaving, or whether they have an aversion to the application of hot or cold towels.

Now it’s time to assess the skin prior to the straight shave service. Carefully check the area that is to be shaved for blemishes, moles, or any lesions of the skin. Additionally, if you plan to perform an outline and nape shave, be sure to check the nape area, sides of neck, and behind the ears. Provided there is no communicable skin diseases, open wounds, or skin irritation, it is safe to perform the shave service. Always use caution when working around moles and any other raised areas of the skin.

Before moving on to the razor handling procedure, take a moment to familiarize yourself with the components that make up the standard straight razor. If you have your own razor, lay it open on the table in front of you and identify its parts using the diagram below: 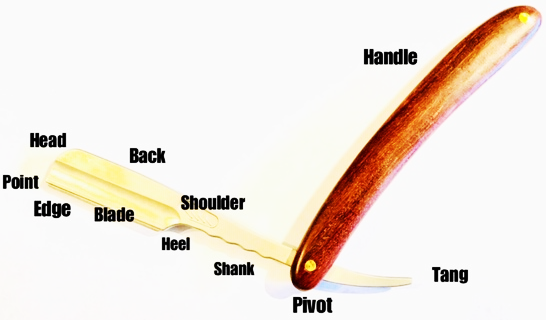 Once you have familiarized yourself with the components of the razor, have a look at the images and instructions below. We suggest that you follow along to practice the procedures to open, hold, and close the razor.

Once you have familiarized yourself with the components of the razor, have a look at the images and instructions below. We suggest that you follow along to practice the procedures to open, hold, and close the razor.

The term razor stroke is used to describe the razor while it is in motion and shaving the skin’s surface.

The way in which the barber/stylist holds the razor in their hand to perform a stroke is called the position. The position will determine the angle of the blade and the direction in which the strokes will be performed. The optimal angle for the blade while shaving the skin is 30 degrees, with the point of the razor leading the stroke.

It is not recommended to shave against the of the hair growth pattern, therefore the razor should be positioned to shave with the grain.

There are four razor positions that barbers use to perform shaving services:

Note: The reverse backhand position is not used to shave the face. Rather, it is used to perform shaving on the sides of the neck.

Let’s review each of the four razor strokes in further detail, followed by the areas of the face in which each stroke is utilized.

In order to perform a facial shave in a systematic way, the shave zones are divided into fourteen specific areas. It is important to learn the order and direction in which each of these fourteen areas are to be shaved, as well as knowing which razor stroke is to be used in each area.

The diagram photo below outlines the fourteen areas of the facial shave and shows which stroke is used in each. A left handed barber will invert the diagram, beginning on the left side.

Sketch and label the diagram above on a head sheet or a mannequin to familiarize yourself with the fourteen shaving areas.

The table below has been created as a quick reference guide to assist the student stylist/barber in learning the strokes and directions that are to be used in each of the fourteen areas. The left of this chart informs the right handed barber of the appropriate stroke and direction; whereas the right side of the chart informs the left handed barber.

There are three main types of shaves traditionally practiced in barbershops:

How to Hone and Strop the Razor

Honing and stropping the razor is what maintains its sharp edge. If the razor begins to pull while shaving, and the resulting shave is not smooth, then it is time to hone and strop your blade.

Honing is the first step to sharpening the blade and consists of lightly passing the razor, leading with the edge, over a gritted stone. Hones come in various grits ranging from coarse to fine. Generally, a razor will be passed over a larger grit first, then a smaller grit, in order to gradually work down the delicate edge. 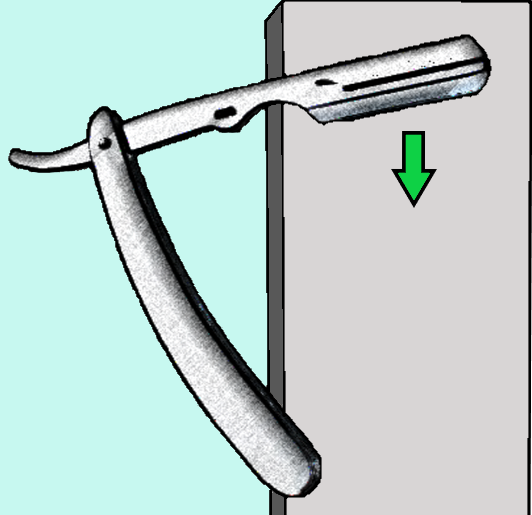 Stropping is the second and final step to sharpening the blade. To strop the razor, the blade is passed, leading with the back, along a canvas or leather strap. This action refines and smooths the honed blade into a precise cutting implement. 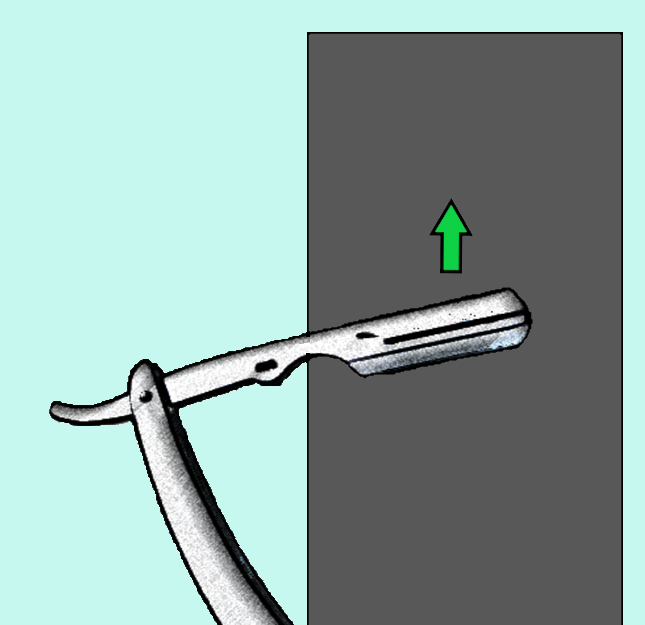 In the video below, you will see the honing and stropping procedure:

Note: This video has no dialogue.

When referring to hair, the grain is the direction in which the hair grows from the follicle.

Ingrown hairs are the result of dead skin cells congesting the hair follicle. This causes the hair to grow sideways or turn back onto itself underneath the skin, rather than growing upward to the skin's surface as expected.

Barbering Techniques for Hairstylists by Arden Magtiza and Gary Franceschini is licensed under a Creative Commons Attribution 4.0 International License, except where otherwise noted.