Intersectionality is a concept that promotes an understanding of people as shaped by the interactions of different social locations or categories ― for example, race, ethnicity, Indigeneity, gender, class, sexuality, geography, age, ability, migration status, and religion.

Examples of facilitation strategies related to the concept of intersectionality 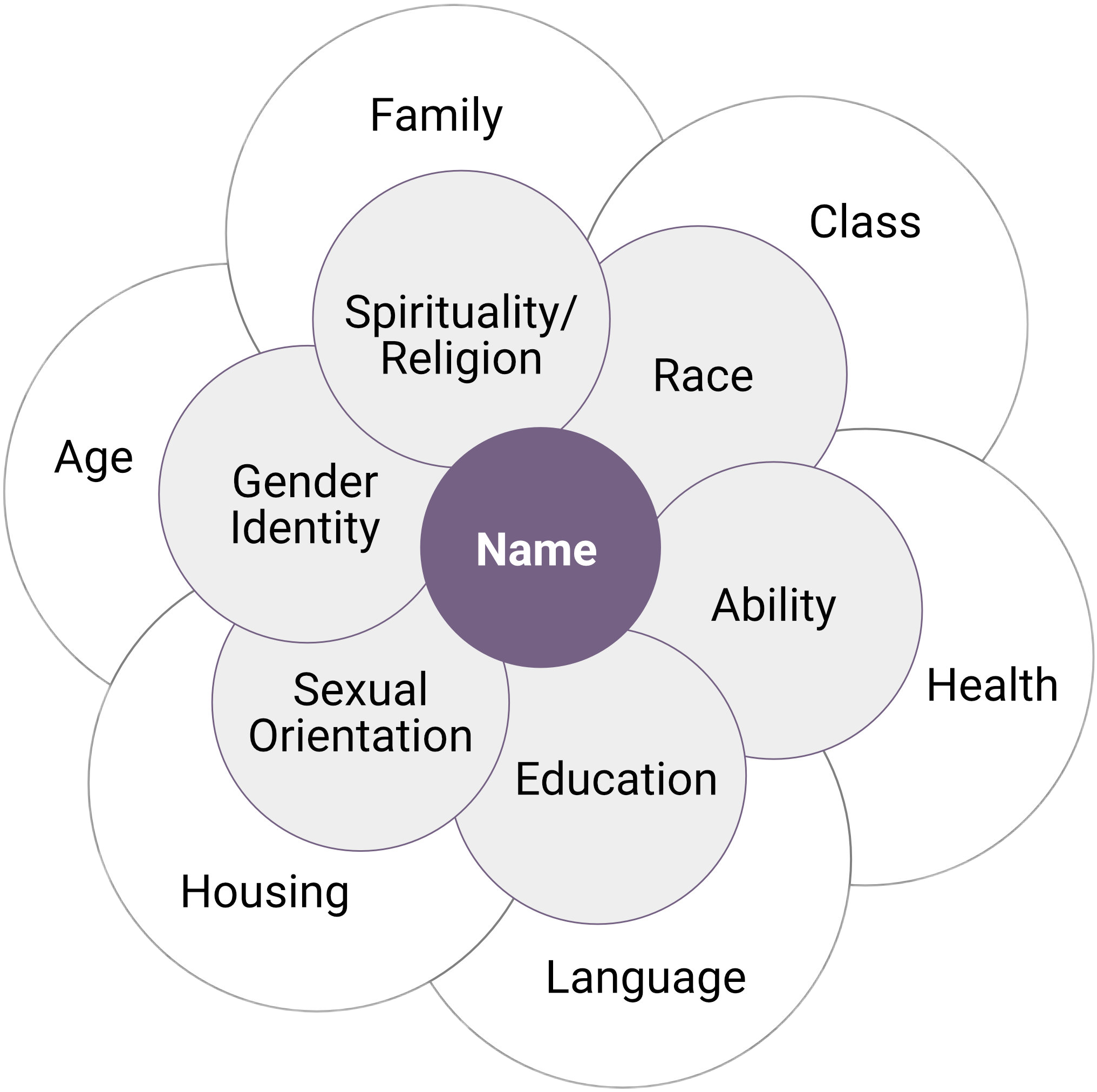 The Power Flower is a visual tool that we can use to explore how our multiple identities combine to create the person we are. 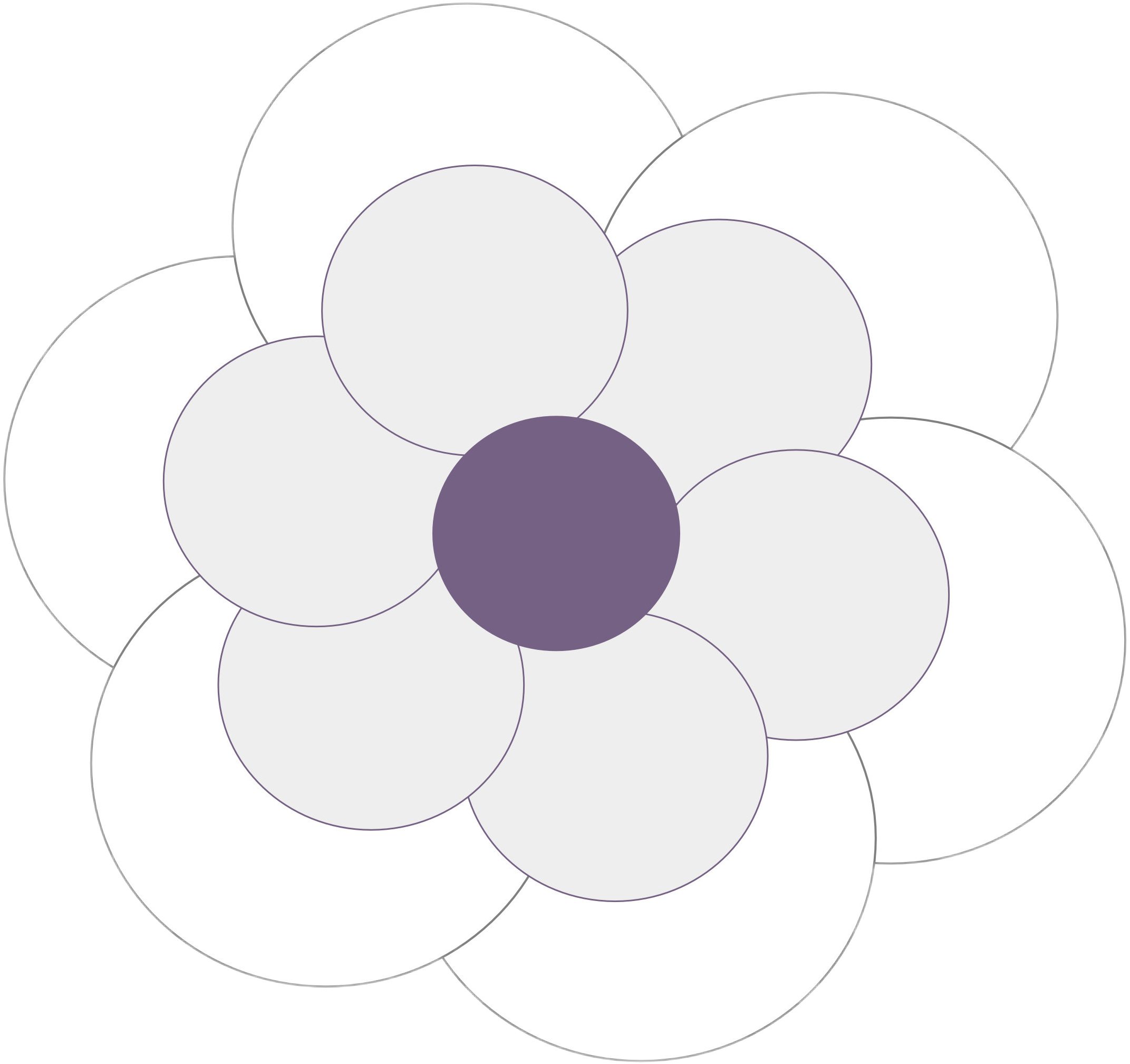 Because of the power inherent in sex and gender dynamics and the role they play in our lives, addressing sex, gender, and gender identity in discussions about sexual violence is essential. Gender can be a complex topic to discuss as there are many elements to consider such as identity, expression, orientation, and sex. Western understandings of sex, gender and gender identity have evolved from a binary view (two options: male and female) to a spectrum which suggests there are multiple sexes (male, female, intersex), many gender identities, and a wide range of gender expressions that may or may not conform to societal expectations. Many cultures have respect and recognition for more than two sexes, genders or gender identities. This is true not only abroad, but among many nations Indigenous to Turtle Island (North America).

Gender: The social roles, expectations, and behaviours that are prescribed to us based on our sex assigned at birth. This can be different between cultures and time.

Gender Identity: Our internal understanding of our own gender. It may or may not match what is outwardly apparent to others or what is expected of us by society.

As a facilitator, you will want to be familiar with key terms used to discuss gender. These terms are continuing to evolve and it is important to refer to people using their own terms.

Inclusive language is continuing to evolve. Qmunity, BC’s Queer, Trans, and Two-Spirit Resource Centre has a resource called Queer Terminology from A to Q  that is regularly updated.

Examples of facilitation strategies related to the concepts of sex, gender, and gender identity

Sexual violence is linked to gender inequities in society. The lives, bodies, agency, and work of women, girls, transgender people, and other gender diverse people are devalued while those of men are overvalued. Devaluing leads to dehumanizing and objectifying; overvaluing leads to entitlement and the misuse of power. Together this forms an environment where sexual violence perpetrated by men against women and people of diverse genders is normalized. One way to combat the pervasiveness of sexual violence is to ensure the norms, systems, and institutions in our society are equitable for people of all genders.

The term “rape culture” was first coined in the 1970s in the United States by second-wave feminists and the concept is often used in sexual violence prevention training in post-secondary institutions. Rape culture describes how sexual violence is common in our society and how it is normalized, condoned, excused, or encouraged. Examples of rape culture include the public tolerance of sexual harassment, the prevalence of sexual violence in media, the socialization of boys that promotes masculine identities based on notions of power and control, persistent discrimination against women and other equity-seeking communities, and the scrutiny given to the sexual histories of victims of sexual violence (Baker, 2014; EVA-BC, 2016).

Many aspects of rape culture are often conceptualized as a continuum or pyramid or can be connected to other forms of violence in society.

Colonialism remains embedded in the legal, political and economic context of Canada today.

Sexual violence and colonialism are interconnected through concepts such as self-determination, autonomy and consent. As well, many social norms in Canada are founded on colonial beliefs which are rooted in white patriarchal supremacy and which have created systems that support individuals, predominantly white men, to positions of power. These norms provide an illusion that people are entitled to what others have, including lands, cultures, and people’s bodies and that force is an acceptable way to claim these things, regardless of the harm to others (National Inquiry into Missing and Murdered Indigenous Women and Girls, 2019; Turpel-Lafond, 2020; Women’s Earth Alliance and Native Youth Sexual Health Network, 2016). An understanding of past and ongoing colonial violence can help provide context to issues such as why many Indigenous people and communities experience high rates of sexual violence today and the potential systemic or historical barriers to Indigenous People reporting sexual violence when it occurs.

Examples of facilitation strategies related to the concept of colonial violence

This Colonial Violence Wheel is a visual tool that can be used to help further discussion on the connections between colonial violence and sexual violence. Each section of the wheel provides examples of strategies, policies, and laws that have been enacted by the Canadian government to colonize and assimilate Indigenous people. Discussion questions can include:

“Healthy masculinity” and “toxic masculinity” are popular terms often used to explore beliefs, values, and stereotypes related to male identity and masculine norms in society. Masculine identity and norms are strongly linked with violence, with men and boys disproportionately likely both to perpetrate violent crimes and to die by homicide and suicide (Heilman and Barker, 2018).

Training on sexual violence on campuses will often explore ideas related to masculinity as a way of helping to shifting societal ideas about masculinity and to centre new values related to inclusivity and diversity. These conversations can help highlight how sexual violence harms people of all genders, including boys, men, and masculine people. It also can be an entry point for cisgender men to take a role in addressing sexual violence in their community.

Examples of facilitation strategies related to healthy and toxic masculinity

A purple cartoon unicorn stands beside different ways to describe gender, sex, and attraction. They are as follows:

[Return to place in the text]

[Return to place in the text]

[Return to place in text]