Understanding and Working with Units

Click play on the following audio player to listen along as you read this section.

The units in the previous part of this section dealt with heat energy measurement. The answers we were calculating indicated an amount or quantity of heat. When measuring temperature we are not measuring quantity but instead we are gauging the intensity of the heat. 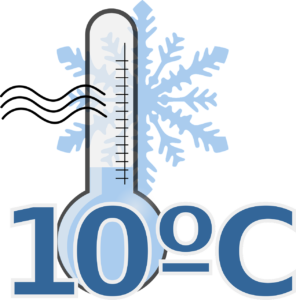 How much heat content would you think there is at −10°C? Honestly who cares? Just get inside and we can sort that out later.

If I were to ask you what units you generally associated with temperature what would you say?

I’m guessing most of you would respond with either Celsius or Fahrenheit. Those would be the two most common methods of describing the heat here in Canada and as Canada uses the metric system we would most likely be seeing the temperature in Celsius.

ABSOLUTE ZERO: The temperature at which all molecular movement ceases to exist.

As there is no molecular movement there is also no heat generated by the molecules.

If you want to know more about absolute zero check out the link: Absolute Zero (Wikipedia)

For example we could look at room temperature.

On another note does anyone watch T.V. anymore or is it just the internet and Netflix? Anyway, back to Celsius and Fahrenheit.

What we want to do here is relate the metric and imperial scale with each other and then add the absolute scale equivalents. We’ll start with the boiling point of water.

Next we find the freezing point of water. Water freezes at 0°C and at 32°F. We can put all those together into a small drawing.

We’ll go through how to go from Celsius to Fahrenheit and back in just a bit but before we get to that we should add the absolute temperature scales.

If we were to add them to our drawing it would look something like the following.

Note that it’s not drawn exactly to scale. If it were then absolute zero would be a little farther to the left. Remember that absolute zero is where there is no molecular movement and therefore no heat generated.

We’ll start with Celsius and Kelvin. What you’ll note from the drawing above is that 0°K, also known as absolute zero, is −273°C.

Fahrenheit and Rankine follow a similar pattern. Absolute zero on the Rankine scale is 0°R while on the Fahrenheit scale it’s −460°F.

If we would apply this idea to the imperial temperature scales we would get the following. To go from −460°F to 0°F would be a change of 460°. On the Rankine scale it would have gone from 0°R to 460°R. 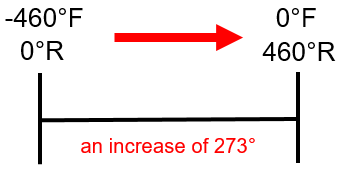 How we deal with this mathematically is the following:

Let’s go through a couple examples going from one to the other. These are going to be fairly straight forward so we won’t go through all the steps like we usually do.

The temperature on the moon during the winter solstice has been measured at 25°Kelvin. What is this in Celsius? Note that we have to rearrange the formula to solve for Celsius.

When baking a cake the oven should be preheated to a temperature of 350°F. What is this temperature in Rankine?

The average daily high temperature in Jerusalem in July is 544°Rankine. How much is that in Fahrenheit? Note that we have to rearrange the formula to solve for Fahrenheit. 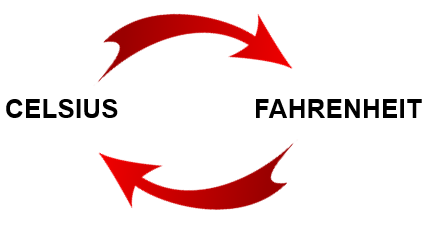 This is probably what we’ve all been waiting for here in this part of the chapter. Going back and forth between Celsius and Fahrenheit is probably the most common temperature calculation tradespeople are required to make.

We could be dealing with gas fitting appliances and have to calculate temperature rise through the appliance in either Celsius or Fahrenheit. We may have to change numbers in code books from one designation to the other. If you are a cook or a baker you might be dealing with a recipe that states the oven temperature in Celsius but your oven only has Fahrenheit on it. In all cases being able to translate between the two temperature scales in important.

If we are going to change Celsius to Fahrenheit the formula is as follows:

There are a couple of things to note here. One is the order the calculation needs to be done. The first thing to be done here is to multiply the degree Celsius by 9/5. After that add the 32.

Doing it this way follows the rules of math and in the next chapter we go through a thorough explanation of those rules. For now just follow the path laid out.

The second thing to note is that the fraction can also be stated as a number. Writing out the formula using a number instead of a fraction would look like this:

You can use either of the two formulas as they both end up with the same answer. It just depends on which one you are more comfortable using.

The temperature of the water in a hot water heater is required to be set at 55°Celsius. Convert this temperature to Fahrenheit.

Step 1: Find the formula to work with.

Step 2: Plug the numbers into the formula.

The approximate flame temperature for natural gas is 1980°Celsius. What is this in Fahrenheit?

Step 1: Find the formula to work with.

Step 2: Plug the numbers into the formula.

Now we have to do the reverse. We have to turn Fahrenheit into Celsius and for that we once again need a formula.

An oven is required to be preheated to a temperature of 425°Fahrenheit. What is the corresponding temperature in Celsius?

Step 1: Find the correct formula to work with.

Step 2: Plug the numbers into the formula

Take a close look at the formula for changing Celsius into Fahrenheit:

Quite often we are required to remember formulas. But if we are able to relate the numbers to a reason why they are in the formula then remembering the formula can become a lot easier. Going from Celsius to Fahrenheit is a great example.

Take the number 32. Where would you guess that number comes from?

Try a couple of practice questions yourself and check the video answers to see how you did.

Bonnie is an apprentice chef studying to get her papers. She’s been asked to work at a restaurant in Montreal as part of her apprenticeship. A particular recipe she is working on requires the oven to be preheated to 200°Celsius. What is this in Fahrenheit?

Bonnie decides to take a trip to Boston for the weekend which is a 5 hour drive if traffic is good. She checks the weather forecast and it’s going to be sunny and about 40° Fahrenheit. What is this in Celsius?

Math for Trades: Volume 2 by Chad Flinn and Mark Overgaard is licensed under a Creative Commons Attribution 4.0 International License, except where otherwise noted.