Earlier in the chapter, reactions were discussed in terms of effective collision frequency and molecule energy levels. In 1889, a Swedish scientist named Svante Arrhenius proposed an equation that relates these concepts with the rate constant:

where k represents the rate constant, Ea is the activation energy, R is the gas constant

, and T is the temperature expressed in Kelvin. A is known as the frequency factor, having units of L mol−1 s−1, and takes into account the frequency of reactions and likelihood of correct molecular orientation.

We can graphically determine the activation energy by manipulating the Arrhenius equation to put it into the form of a straight line. Taking the natural logarithm of both sides gives us:

, where the slope is

Using the data from the following table, determine the activation energy of the reaction:

We can obtain the activation energy by plotting ln k versus

, knowing that the slope will be equal to

First determine the values of ln k and

, and plot them in a graph: 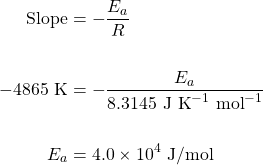 The activation energy can also be calculated algebraically if k is known at two different temperatures:

We can subtract one of these equations from the other:

This equation can then be further simplified to:

Determine the value of Ea given the following values of k at the temperatures indicated:

Substitute the values stated into the algebraic method equation: 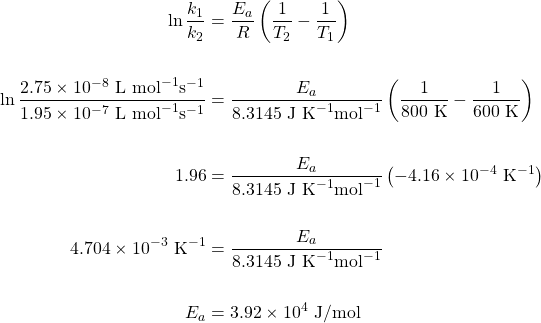 Activation Energy and the Arrhenius Equation by Jessie A. Key is licensed under a Creative Commons Attribution 4.0 International License, except where otherwise noted.