There are some circumstances in which, given some initial amounts and the Keq, you will have to determine the concentrations of all species when equilibrium is achieved. Such calculations are not difficult to do, especially if a consistent approach is applied. We will consider such an approach here.

Suppose we have this simple equilibrium. Its associated Keq is 4.0, and the initial concentration of each reactant is 1.0 M:

Because we have concentrations for the reactants but not the products, we presume that the reaction will proceed in the forward direction to make products. But by how much will it proceed? We don’t know, so let us assign it a variable. Let us assume that x M H2 reacts as the reaction goes to equilibrium. This means that at equilibrium, we have (1.0 − x) M H2 left over.

How much HCl is made? We start with zero, but we also see that 2 mol of HCl are made for every mole of H2 (or Cl2) that reacts (from the coefficients in the balanced chemical equation), so if we lose x M H2, we gain 2x M HCl. So now we know the equilibrium concentrations of our species:

We can substitute these concentrations into the Keq expression for this reaction and combine it with the known value of Keq:

This is an equation in one variable, so we should be able to solve for the unknown value. This expression may look formidable, but first we can simplify the denominator and write it as a perfect square as well:

The fraction is a perfect square, as is the 4.0 on the right. So we can take the square root of both sides:

Now we rearrange and solve (be sure you can follow each step): 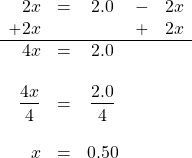 The units are assumed to be molarity. To check, we simply substitute these concentrations and verify that we get the numerical value of the Keq, in this case 4.0:

We formalize this process by introducing the ICE chart, where ICE stands for initial, change, and equilibrium.

The ICE chart for the above example would look like this:

Substituting the last row into the expression for the Keq yields

which, of course, is the same expression we have already solved and yields the same answers for the equilibrium concentrations. The ICE chart is a more formalized way to do these types of problems. The + sign is included explicitly in the change row of the ICE chart to avoid any confusion.

Set up an ICE chart and solve for the equilibrium concentrations in this chemical reaction.

Solution
The ICE chart is set up like this. First, the initial values:

At equilibrium, the resulting concentrations will be a combination of the initial amount and the changes:

The expressions in the equilibrium row go into the Keq expression:

We rearrange this into a quadratic equation that equals 0:

Now we use the quadratic equation to solve for the two possible values of x:

Because x is the final concentration of both CO and I2, it cannot be negative, so we discount the second numerical answer as impossible. Thus x = 0.0216.

Going back to determine the final concentrations using the expressions in the E row of our ICE chart, we have:

You can verify that these numbers are correct by substituting them into the Keq expression and evaluating and comparing to the known Keq value.

Test Yourself
Set up an ICE chart and solve for the equilibrium concentrations in this chemical reaction.

Answer
The completed ICE chart is as follows: