There are some common — and important — functional groups that contain elements other than oxygen. In this section, we will consider three of them.

A tertiary amine has all three H atoms substituted with R groups:

Naming simple amines is straightforward: name the R groups as substituents and then add the suffix –amine, using numerical suffixes on the substituent names as necessary. This amine is diethylamine:

Solution
This amine has a methyl group, an ethyl group, and a propyl group. Listing the names in alphabetical order, this amine is ethylmethylpropylamine.

Test Yourself
Name this amine.

As with NH3, the N atom in amines can accept a proton onto the lone electron pair on the N atom. That is, amines act as Brønsted-Lowry bases (i.e., proton acceptors):

(For more information on Brønsted-Lowry bases, see the section “Brønsted-Lowry Acids and Bases”.) The amine becomes an ion, the organic counterpart of the ammonium (NH4+) ion.

Because no amine is presented in Table 12.1 “Strong Acids and Bases,” all amines are weak bases. The weakness of amines is about the same as that of carboxylic acids. N-containing organic compounds are very common in nature, and they all act as weak bases. Some of these compounds have rather complicated structures. Below are some N-containing substances that you may recognize. 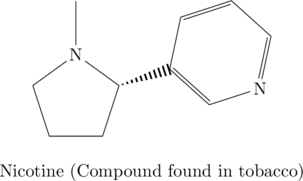 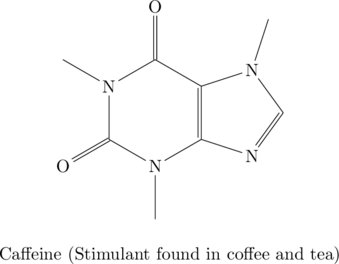 An amide functional group is a combination of an amine group and a carbonyl group:

The bond between the N of the amine group and the C of the carbonyl group is called an amide bond. Amide bonds are particularly important in biological molecules called proteins, which are composed of strings of amino acids — molecules that have an amine group and a carboxylic acid group in them. The amine group on one amino acid reacts with the carboxylic acid group of another amino acid, making a chain held together by amide bonds. We will consider proteins later in this chapter.

Draw the structure of the amide formed by the combination of ethylamine and butanoic acid.

Solution
The structures of ethylamine and butanoic acid are:

When they come together to make an amide, an H2O molecule is lost, and the N of the amine group bonds to the C of the carboxyl group. The resulting molecule is:

Test Yourself
Draw the structure of the amide formed by the combination of methylamine and formic acid.

Sulfur is below oxygen on the periodic table, and it occasionally shows some similar chemistry. One similarity is that an S atom can take the place of an O atom in an alcohol, to make a molecule that looks like this:

The sulfur analog of an alcohol is called a thiol. The formal way of naming a thiol is similar to that of alcohols, except that instead of using the suffix –ol, you use the suffix –thiol. The following illustrates thiol nomenclature:

An older system uses the word mercaptan in naming simple thiols, much like the word alcohol is used with small alcohols. These thiols can also be named like this:

Many thiols have strong, objectionable odours; indeed, the spray from skunks is composed of thiols and is detectable by the human nose at concentrations of less than 10 ppb. Because natural gas is odourless, thiols are intentionally added — at very low levels, of course — so that gas leaks can be more easily detected. Not all thiols have objectionable odours; this thiol, grapefruit mercaptan, is responsible for the odour of grapefruit:

Cysteine is an amino acid that is a thiol: 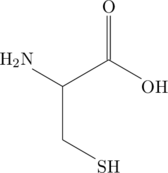 Cysteine plays an important role in protein structure. If two cysteine amino acids in a protein chain approach each other, they can be oxidized, and an S–S bond (also known as a disulfide bond) is formed:

where the R group is the rest of the cysteine molecule. The disulfide bond is strong enough to fix the position of the two cysteine groups, thus imposing a structure on the protein. Hair is composed of about 5% cysteine, and the breaking and remaking of disulfide bonds between cysteine units is the primary mechanism behind straightening and curling hair (hair “perms”).

The description of cysteine mentioned that it is an amino acid. Amino acids are the fundamental building blocks of proteins, a major biological component. Proteins are a necessary part of the diet; meat, eggs, and certain vegetables such as beans and soy are good sources of protein and amino acids.

All life on earth — from the lowliest single-celled organism to humans to blue whales — relies on proteins for life, so all life on earth is dependent on amino acids. The human body contains 20 different amino acids (curiously, other organisms may have a different number of amino acids). However, not all of them must be obtained from the diet. The body can synthesize 12 amino acids. The other 8 must be obtained from the diet. These 8 amino acids are called the essential amino acids. Daily requirements range from 4 mg per kilogram of body weight for tryptophan to 40 mg per kilogram of body weight for leucine. Infants and children need a greater mass per kg of body weight to support their growing bodies; also, the number of amino acids that are considered essential for infants and children is greater than for adults due to the greater protein synthesis associated with growth.

Because of the existence of essential amino acids, a diet that is properly balanced in protein is necessary. Rice and beans, a very popular food dish in Latin cuisines, actually provides all the essential amino acids in one dish; without one component, the dish would be nutritionally incomplete. Corn (maize) is the most-grown grain crop in the world, but an overreliance on it as a primary food source deprives people of lysine and tryptophan, which are two essential amino acids. People on restricted diets — whether out of necessity or by choice (e.g., vegetarians) — may be missing the proper amount of an essential amino acid, so it is important to vary the diet when possible to ensure ingestion of a wide range of protein sources.