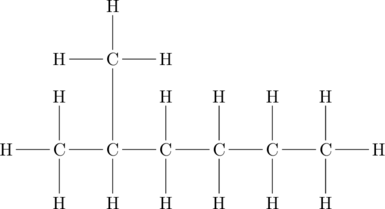 However, in this molecule, the longest chain of C atoms is not six, but seven, as shown. So this molecule will be named as a heptane: 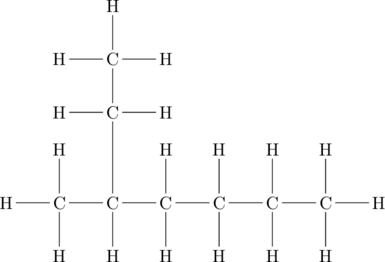 To name a branched hydrocarbon, the name of the substituent is combined with the parent name of the hydrocarbon without spaces. However, there is likely one more step. The longest chain of the hydrocarbon must be numbered, and the locant (numerical position of the substituent) must be included to account for possible isomers. As with double and triple bonds, the main chain is numbered to give the substituent the lowest possible number. For example, in the alkane shown here, the longest chain is five C atoms long, so it is a pentane: 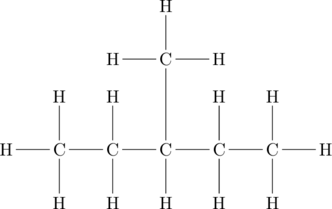 There is a one-carbon substituent on the third C atom, so there is a methyl group at position 3. We indicate the position using the number, which is followed by a hyphen, the substituent name, and the parent hydrocarbon name—in this case, 3-methylpentane. That name is specific to that particular hydrocarbon and no other molecule. Organic chemistry nomenclature is very specific following the general format shown in Figure 16.3 “IUPAC Nomenclature Guide.”

It is common to represent organic molecules using bond-line structures, where hydrogens are omitted for clarity, and carbons are represented by a corner or “kink” in the line. For example, 3-methylpentane can be written as:

It is understood that any unwritten covalent bonds are bonds with H atoms. With this understanding, we recognize that the structural formula for 3-methylpentane refers to a molecule with the formula C6H14.

Solution
The longest continuous carbon chain has seven C atoms, so this molecule is named as a heptane. There is a two-carbon substituent on the main chain, which is an ethyl group. To give the substituent the lowest numbering, we number the chain from the right side and see that the substituent is on the third C atom. So this hydrocarbon is 3-ethylheptane.

Branched hydrocarbons may have more than one substituent. If the substituents are different, give each substituent a number (using the smallest possible numbers) and list the substituents in alphabetical order, with the numbers separated by hyphens and no spaces in the name. So the molecule shown here is 3-ethyl-2-methylpentane: 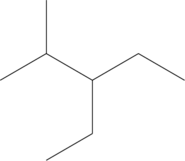 The longest chain has four C atoms, so it is a butane. There are two substituents, each of which consists of a single C atom; they are methyl groups. The methyl groups are on the second and third C atoms in the chain (no matter which end the numbering starts from), so we would name this molecule 2,3-dimethylbutane. Note the comma between the numbers, the hyphen between the numbers and the substituent name, and the presence of the prefix di– before the methyl. Other molecules — even with larger numbers of substituents — can be named similarly. 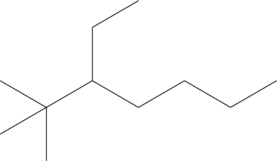 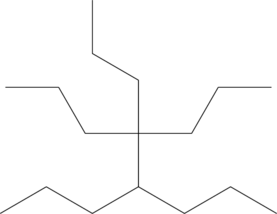 Alkenes and alkynes are named in a similar fashion. The biggest difference is that when identifying the longest carbon chain, it must contain the C–C double or triple bond. Furthermore, when numbering the main chain, the double or triple bond gets the lowest possible number. This means that there may be longer or higher-numbered substituents than would be allowed if the molecule were an alkane. For example, this molecule is 2,4-dimethyl-3-heptene (note the number and the hyphens that indicate the position of the double bond).

Solution
The longest chain that contains the C–C triple bond has six C atoms, so this is a hexyne molecule. The triple bond starts at the third C atom, so this is a 3-hexyne. Finally, there are two methyl groups on the chain; to give them the lowest possible number, we number the chain from the left side, giving the methyl groups the second position. So the name of this molecule is 2,2-dimethyl-3-hexyne.

Once you master naming hydrocarbons from their given structures, it is rather easy to draw a structure from a given name. Just draw the parent chain with the correct number of C atoms (putting the double or triple bond in the right position, as necessary) and add the substituents in the proper positions. If you start by drawing the C atom backbone, you can go back and complete the structure by adding H atoms to give each C atom four covalent bonds. From the name 2,3-dimethyl-4-propyl-2-heptene, we start by drawing the seven-carbon parent chain with a double bond starting at the third carbon:

We add to this structure two one-carbon substituents on the second and third C atoms:

We finish the carbon backbone by adding a three-carbon propyl group to the fourth C atom in the parent chain: 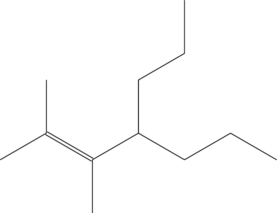 If we so choose, we can add H atoms to each C atom to give each carbon four covalent bonds, being careful to note that the C atoms in the double bond already have an additional covalent bond. (How many H atoms do you think are required?[1])

Draw the carbon backbone for 2,3,4-trimethylpentane.

Solution
First, we draw the five-carbon backbone that represents the pentane chain:

According to the name, there are three one-carbon methyl groups attached to the second, third, and fourth C atoms in the chain. We finish the carbon backbone by putting the three methyl groups on the pentane main chain:

Test Yourself
Draw the carbon backbone for 3-ethyl-6,7-dimethyl-2-octene. 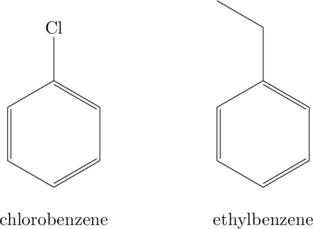 If there are two or more substituents on a benzene molecule, the relative positions must be numbered, just as an aliphatic chain of C atoms is numbered. The substituent that is first alphabetically is assigned position 1, and the ring is numbered in a circle to give the other substituents the lowest possible number(s).

If an aliphatic chain attached to a benzene ring has more carbons, the benzene ring is treated as a substituent and is given the name phenyl-. This molecule is 4-phenylheptane: 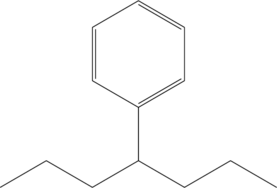