Colonization is the practice of domination. Colonization is when a country violently invades another and claims the land as its own. New inhabitants move in and forcibly push out, control and oppress people who are indigenous to the land. Not only is land stolen in the colonization process but the colonizers also steal much of the indigenous people’s culture.

Canada exists as we know it today because of colonization.

Here in BC, 95% of the land belonging to First Nations, Métis, and Inuit peoples is unceded. This means that the land wasn’t legally signed away to the Crown. When the land was taken, there was no compensation or treaties. The land we live on was stolen. Alternatively, Alberta was broken up into Treaties 6, 7, and 8, meaning that the land was ceded (or signed away) by the First Nations peoples. That’s not to say that there wasn’t immense pressure or coercion from the government throughout that process.

Colonization is what set the DNA, or pattern of North America. Like we mentioned earlier, culture is connected to history. The way something begins (such as a country), sets the direction for centuries to come. Though the act of officially colonizing Canada was hundreds of years ago, the damage of colonization continues to this day.

Colonization was both a cultural and literal genocide (as we have seen from the residential schools).

We will look at the historical and ongoing impact of colonization, and its impact on culture.

The Process of Decolonization Today

Decolonization is about dismantling oppressive practices while supporting Indigenous peoples to reclaim land, culture, language, community, family, history, and traditions that have been taken away during the process of colonization.

In a way the word “decolonization” can be confusing. We are not saying that settlers need to move back to England or wherever they came from. That would be impossible. When we use the word “decolonization” we are talking about dismantling and deconstructing the systems that continue to cause harm to First Nations, Métis, and Inuit peoples. As Canadians we can do this by supporting our nation’s genuine efforts for reconciliation, and we must do what we can to support the shifting of harmful systems so that healing can begin to happen.

In order to create an environment where people feel safe to look for and receive support, we must commit to practicing cultural humility and to providing culturally safe spaces and practices. It’s about offering a space (physically and emotionally) that is free of racism and discrimination. This is something that takes personal commitment, as well as policies and government rulings, to ensure it turns into direct action.

“In 2015 the Ministry of Health, Ministry of Mental Health and Addictions, the First Nations Health Authority and provincial health authorities signed a Declaration of Commitment to cultural safety and humility. This is a commitment that each signatory will have an action plan and make advancements within their organization to ensure health care in BC is culturally safe and appropriate for those who reside here.” – Tripartite Committee on First Nations Health Annual Report

The Truth and Reconciliation Commission

Canada’s Truth and Reconciliation Commission (TRC) ran from 2008 to 2015 as a part of the Indian Residential Schools Settlement Agreement. The purpose of the TRC was to document the history and severe damage done to Indigenous peoples by the residential school program in Canada. During this program, indigenous children were taken from their families and sent to government-run schools. The children were victimized in so many ways including having their culture and everything they knew ripped away from them. This program ran for more than 160 years. The last residential school in Canada wasn’t closed until 1996.

Residential schools are a part of Canada’s history, and one of the ways in which our country committed cultural genocide. It is essential that we as a nation talk about this –  that we listen to and share stories from those who were affected by these atrocities. We can only change as a nation if we understand the severity and ongoing impact of our past. We must collectively and individually learn from our history and do better.

See more about the Truth and Reconciliation Commission.

Why We do Land Acknowledgements 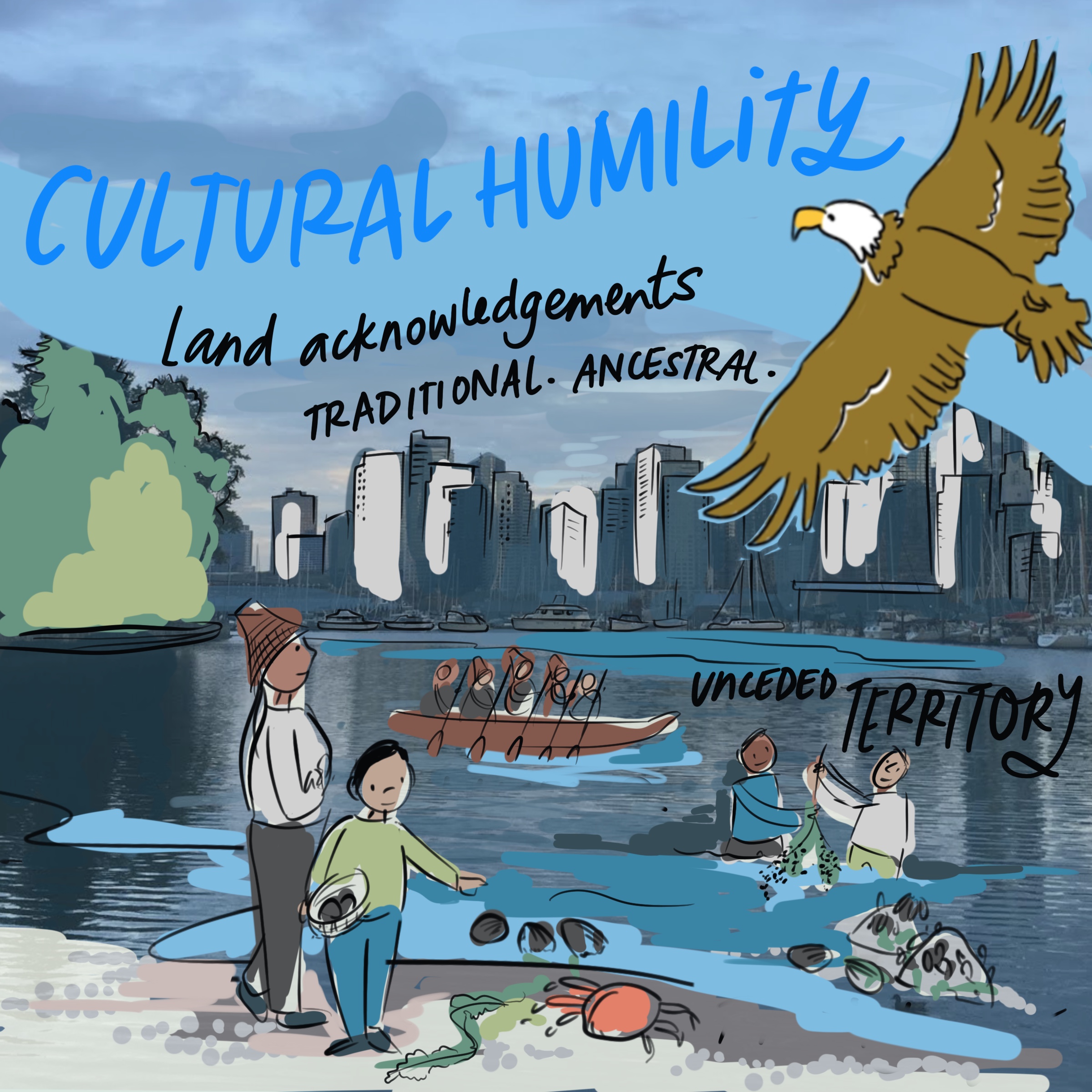 Here in BC, we use these words:

Your campus will have a sample of a land acknowledgement on their website. Look it up and write it down here:

Have you lived in a different province, or do you live outside of BC now? Do you have a different way of doing land acknowledgements based on the colonization history of that province?

Let’s look a little closer at the impact of colonization on Indigenous culture. To understand this more clearly we must look at the Indian Act, which is still legal today.

Canada became a country in 1867. The Indian Act became law in 1876. Amendments were made to the act in 1951 and 1985. This act was designed to control every aspect of Indigenous life, from language to the right to vote. It made practicing First Nations culture illegal.

Indigenous people were considered savages by the colonizers, and the government wanted to strip them of their ancestral culture and assimilate them into the colonizers’ culture. Canada’s first Prime Minister said this regarding the Indian Act:“The great aim of our legislation has been to do away with the tribal system and assimilate the Indian people in all respects with the other inhabitants of the Dominion as speedily as they are fit to change.” – John A Macdonald, (1887)

The Indigenous Corporate training Inc. website has a great article called, 21 Things You May Not Have Known About The Indian Act. Founder and President of this resource, Bob Joseph, has published a book by the same name. In this article Joseph lists the 21 sections of the Indian Act. Let’s look at a few here that directly relate to culture.

Considering everything we have covered so far about culture and well-being, what do you think the repercussions of these laws are for Indigenous people today?

Regaining the culture that was stolen is an important part of healing for First Nations, Métis, and Inuit peoples.

There is so much more to learn about this topic that we couldn’t include in this module. Please seek out First Nations, Métis, and Inuit perspectives on the topics of decolonization and culture. Part of our personal work in decolonization is taking responsibility to learn the history on our own, while considering what we can contribute to breaking down the harmful systems of colonization.