Often, to get an idea of the behaviour of an equation or some function, a visual representation that displays the solutions to the equation or function in the form of a graph will be made. Before exploring this, it is necessary to review the foundations of a graph. The following is an example of what is called the coordinate plane of a graph. 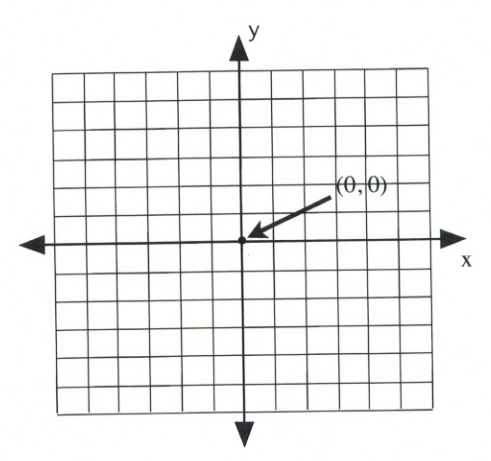 -axis) and a vertical number line (

-axis). Where the two lines meet in the centre is called the origin. This centre origin is where

and is represented by the ordered pair

-axis, moving to the right from the centre 0, the numbers count up, and

To the left of the centre 0, the numbers count down, and

-axis, moving up from the centre 0, the numbers count up, and

Moving down from the centre 0, the numbers count down, and

When identifying points on a graph, a dot is generally used with a set of parentheses following that gives the

-value followed by the

and is given the formal name of an ordered pair.

This coordinate system is universally used, with the simplest example being the kind of treasure map that is usually encountered in childhood, or the longitude and latitude system used to identify any position on the Earth. For this system, the

-axis (which represents latitude) is the equator and the

-axis (which represents longitude) or the prime meridian is the line that passes though Greenwich, England. The origin of the Earth’s latitude and longitude (0°, 0°) is a fictional island called “Null Island.”

Identify the coordinates of the following data points. 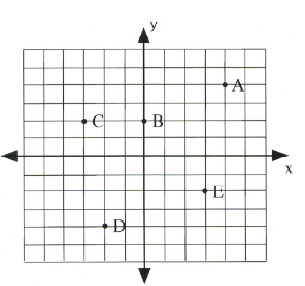 -coordinate, move 4 to the right from the origin. For the

-coordinate, stay at the origin. For the

-coordinate, move 3 to the left from the origin. For the

-coordinate, move 2 to the left from the origin. For the

-coordinate, move 3 to the right from the origin. For the

(up 2). Following these instructions, starting from the origin, results in the correct point.

-coordinate and up 1 for the 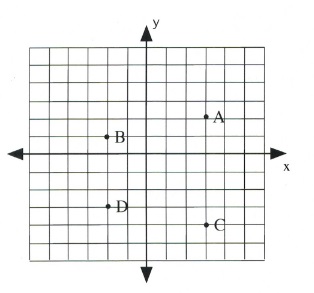