Distance, rate and time problems are a standard application of linear equations. When solving these problems, use the relationship rate (speed or velocity) times time equals distance.

The problems to be solved here will have a few more steps than described above. So to keep the information in the problem organized,  use a table. An example of the basic structure of the table is below:

The third column, distance, will always be filled in by multiplying the rate and time columns together. If given a total distance of both persons or trips,  put this information in the distance column. Now use this table to set up and solve the following examples.

Joey and Natasha start from the same point and walk in opposite directions. Joey walks 2 km/h faster than Natasha. After 3 hours, they are 30 kilometres apart. How fast did each walk?

The distance travelled by both is 30 km. Therefore, the equation to be solved is: 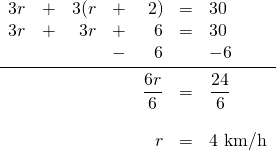 This means that Natasha walks at 4 km/h and Joey walks at 6 km/h.

The distance travelled downstream is the same distance that they travelled upstream. Therefore, the equation to be solved is:

This means the campers paddled downstream for 0.25 h and spent 0.75 h paddling back.

The distance travelled by both is the same. Therefore, the equation to be solved is:

This means that Terry travels for 8 h and Sally only needs 2 h to catch up to him.

The distance travelled by both is 30 km. Therefore, the equation to be solved is:

Distance, time and rate problems have a few variations that mix the unknowns between distance, rate and time. They generally involve solving a problem that uses the combined distance travelled to equal some distance or a problem in which the distances travelled by both parties is the same. These distance, rate and time problems will be revisited later on in this textbook where quadratic solutions are required to solve them.

For Questions 1 to 8, find the equations needed to solve the problems. Do not solve.