While square roots are the most common type of radical, there are higher roots of numbers as well: cube roots, fourth roots, fifth roots, and so on. The following is a definition of radicals:

inside the radical is called the index. It dictates which root you are taking. For square roots, the index is 2, which, since it is the most common root, is not usually written.

Here are several higher powers of positive numbers and their roots: 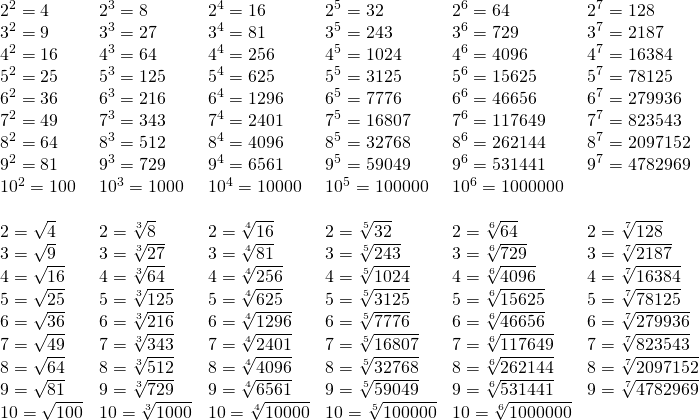 Note there is a notable distinction between solutions of even roots and of odd roots. For even-powered roots, the solution is always +/− or ±. The reason for this can shown in the following examples.

Find the solutions to √4.

There are two ways to multiple identical numbers to equal 4:

The ± solution occurs for all even roots and can be seen in:

All roots that have an even index will always have ± solutions.

Odd-powered roots do not share this feature and will only maintain the sign of the number that you are taking the root of.

Find the solutions to

All negative-indexed roots will keep the sign of the number being rooted.

Higher roots can be simplified in much the same way one simplifies square roots: through using the product property of radicals.

Use the product property of radicals to simplify the following.

This strategy is used to take the higher roots of variables. In this case, only take out whole number multiples of the root index. This is shown in the following examples.

For this root, you will break the exponent into multiples of the index 4.

will be broken up into

The fourth roots of

remains under the fourth root radical. This looks like:

For this root, you will break the exponent into multiples of the index 5.

will be broken up into

The fifth roots of

remains under the fifth root radical.