The untimely death of Alfred Wegener didn’t solve any problems for those who opposed his ideas because they still had some inconvenient geological truths to deal with. One of those was explaining the distribution of terrestrial species across five continents that are currently separated by hundreds or thousands of kilometres of ocean water (Figure 10.2), and another was explaining the origin of extensive fold-belt mountains, such as the Appalachians, the Alps, the Himalayas, and the Canadian Rockies.

Before we go any further, it is important to know what was generally believed about global geology before plate tectonics. At the beginning of the 20th century, geologists had a good understanding of how most rocks were formed and understood their relative ages through interpretation of fossils, but there was considerable controversy regarding the origin of mountain chains, especially fold-belt mountains. At the end of the 19th century, one of the prevailing views on the origin of mountains was the theory of contractionism — the idea that since Earth is slowly cooling, it must also be shrinking. In this scenario, mountain ranges had formed like the wrinkles on a dried-up apple, and the oceans had submerged parts of former continents. While this theory helped to address the dilemma of the terrestrial fossils, it came with its own set of problems, one being that the amount of cooling couldn’t produce the necessary amount of shrinking, and the other being the principle of isostasy (which had already been around for several decades), which wouldn’t allow continents to sink. (See Section 9.4 for a review of the important principle of isostasy.)

Another widely held view was permanentism, in which it was believed that the continents and oceans have always been generally as they are today. This view incorporated a mechanism for creation of mountain chains known as the geosyncline theory. A geosyncline is a thick deposit of sediments and sedimentary rocks, typically situated along the edge of a continent (Figure 10.5).

The idea of geosynclines developing into fold-belt mountains originated in the middle of the 19th century, proposed first by James Hall and later elaborated by Dwight Dana, both of whom worked extensively in the Appalachian Mountains of the eastern United States. The process of converting a geosyncline into a mountain belt was never really adequately explained, although it was widely believed that mountain belts formed when geosynclines were compressed by forces pushing from either side. The problem is that, without the lateral forces related to plate tectonics, no one was able to adequately describe what would do the pushing. The sediments that accumulate within a geosyncline are derived from erosion of the adjacent continent. Geosynclinal sediments — which eventually turn into sedimentary rocks — may be many thousands of metres thick. As they accumulate, they push down the pre-existing crustal rocks. Extensive geosynclinal deposits exist around much of the coastline of most of the continents; there is a large geosyncline along the eastern edge of North America.

Proponents of the geosyncline theory of mountain formation, and there were many well into the 1960s, also had the problem of explaining the intercontinental terrestrial fossil matchups. The simple explanation was that there were “land bridges” across the Atlantic along which animals and plants could migrate back and forth. One proponent of this idea was the American naturalist Ernest Ingersoll. Referring to evidence of past climate changes, Ingersoll contributed the following to the Encyclopedia Americana in 1920: “The most interesting feature of these changes, however, is that by which, now and again, the Old World was connected with the New by necks or spaces of land, known as “land-bridges”; especially as these permitted an interchange of plants and animals, giving to us many new ones from the other side of the ocean, including, finally, man himself.”[1]

There are many problems with the land-bridge theory, one being that it is completely inconsistent with isostasy, and another that there is no evidence of the remnants of the land bridges. The Atlantic Ocean is several thousand metres deep over wide areas, and so the underwater slopes leading up to a land bridge would have to have been at least tens of kilometres wide in most places, and many times that in others. A land bridge of that size would certainly have left some trace.

Exercise 10.1 Fitting the Continents Together 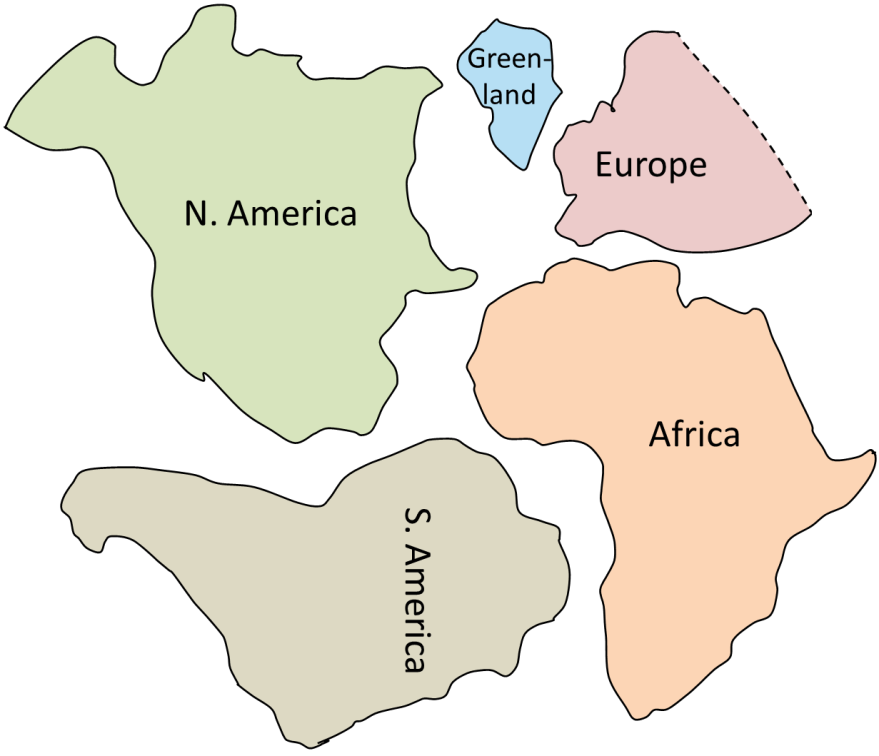 The main continents around the Atlantic Ocean are depicted here in the shapes that they might have had during the Mesozoic, including the extents of their continental shelves. Cut these shapes out and see how well you can fit them together in the positions that these areas occupied within Pangea. You can refer to a map of Pangea to help you make the fit.