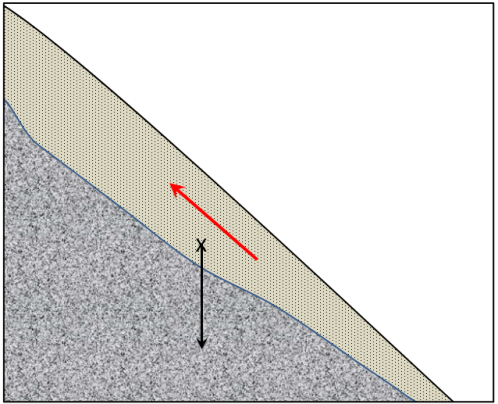 1. In the scenario shown here, the gravitational force on the unconsolidated sediment overlying the point marked with an X is depicted by the black arrow. Draw in the two arrows that show how this force can be resolved into the shear force (along the slope) and the normal force (into the slope).

2. The red arrow in the diagram depicts the shear strength of the sediment. Assuming that the relative lengths of the shear force arrow (which you drew in question 1), and the shear strength arrow are indicative of the likelihood of failure, predict whether this material is likely to fail or not.

3. After several days of steady rain, the sediment becomes saturated with water and its strength is reduced by 25%. What are the likely implications for the stability of this slope?

5. Explain why moist sand is typically stronger than either dry sand or saturated sand.

6. In the context of mass wasting, how does a flow differ from a slide?

7. If a large rock slide starts moving at a rate of several metres per second, what is likely to happen to the rock, and what would the resulting failure be called?

8. In what ways does a debris flow differ from a typical mudflow?

9. In the situation described in the chapter regarding lahar warnings at Mt. Rainier, the residents of the affected regions have to assume some responsibility and take precautions for their own safety. What sort of preparation should the residents make to ensure that they can respond appropriately when they hear lahar warnings?

10. What factors are likely to be important when considering the construction of a house near the crest of a slope that is underlain by glacial sediments?