As described above, regional metamorphism occurs when rocks are buried deep in the crust. This is commonly associated with convergent plate boundaries and the formation of mountain ranges. Because burial to 10 km to 20 km is required, the areas affected tend to be large.

Rather than focusing on metamorphic rock textures (slate, schist, gneiss, etc.), geologists tend to look at specific minerals within the rocks that are indicative of different grades of metamorphism. Some common minerals in metamorphic rocks are shown in Figure 7.21, arranged in order of the temperature ranges within which they tend to be stable. The upper and lower limits of the ranges are intentionally vague because these limits depend on a number of different factors, such as the pressure, the amount of water present, and the overall composition of the rock.

The southern and southwestern parts of Nova Scotia were regionally metamorphosed during the Devonian Acadian Orogeny (around 400 Ma), when a relatively small continental block (the Meguma Terrane[1]) was pushed up against the existing eastern margin of North America. As shown in Figure 7.22, clastic sedimentary rocks within this terrane were variably metamorphosed, with the strongest metamorphism in the southwest (the sillimanite zone), and progressively weaker metamorphism toward the east and north. The rocks of the sillimanite zone were likely heated to over 700°C, and therefore must have buried to depths between 20 km and 25 km. The surrounding lower-grade rocks were not buried as deep, and the rocks within the peripheral chlorite zone were likely not buried to more than about 5 km.

A probable explanation for this pattern is that the area with the highest-grade rocks was buried beneath the central part of a mountain range formed by the collision of the Meguma Terrane with North America. As is the case with all mountain ranges, the crust became thickened as the mountains grew, and it was pushed farther down into the mantle than the surrounding crust. This happens because Earth’s crust is floating on the underlying mantle. As the formation of mountains adds weight, the crust in that area sinks farther down into the mantle to compensate for the added weight. The likely pattern of metamorphism in this situation is shown in cross-section in Figure 7.23a. The mountains were eventually eroded (over tens of millions of years), allowing the crust to rebound upward and exposing the metamorphic rock (Figure 7.23b).

The metamorphism in Nova Scotia’s Meguma Terrane is just one example of the nature of regional metamorphism. Obviously many different patterns of regional metamorphism exist, depending on the parent rocks, the geothermal gradient, the depth of burial, the pressure regime, and the amount of time available. The important point is that regional metamorphism happens only at significant depths. The greatest likelihood of attaining those depths, and then having the once-buried rocks eventually exposed at the surface, is where mountain ranges existed and have since been largely eroded away. As this happens typically at convergent plate boundaries, directed pressures can be strong, and regionally altered rocks are almost always foliated. 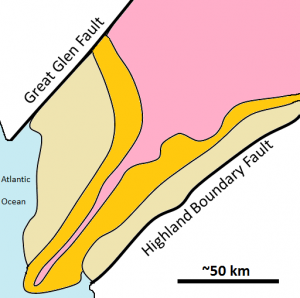 The map shown here represents the part of western Scotland between the Great Glen Fault and the Highland Boundary Fault. The shaded areas are metamorphic rock, and the three metamorphic zones represented are garnet, chlorite, and biotite.

Label the three coloured areas of the map with the appropriate zone names (garnet, chlorite, and biotite).

Indicate which part of the region was likely to have been buried the deepest during metamorphism.

British Geologist George Barrow studied this area in the 1890s and was the first person anywhere to map metamorphic zones based on their mineral assemblages. This pattern of metamorphism is sometimes referred to as “Barrovian.”