1. What factors control the size of waves?

2. Referring to Table 17.1, approximately what size of waves (amplitude and wavelength) would you expect with a 65 km/h wind blowing for 40 hours over 1,000 km of sea?

3. If the average wavelength of a series of waves is 100 m, at what depth of water will the waves start to feel the bottom, and how will that change their behaviour?

4. What is the difference between a longshore current and longshore drift?

5. On this diagram, the waves (dashed blue lines) are approaching an irregular coast. The red arrows represent the energy of those waves, and one has been extended to show where that energy would hit the shore. Extend the other “energy lines” in a similar way, and comment on how this relates to erosion of this coastline. 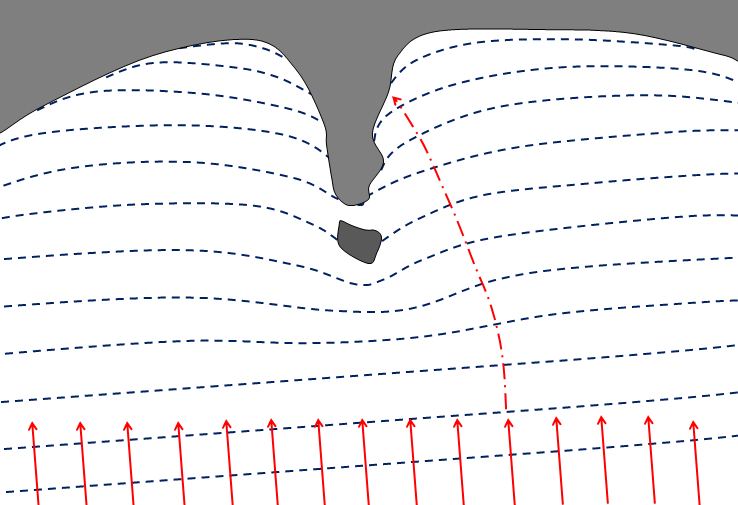 6. Explain the origins of a wave-cut platform.

7. How do we define the limits of the beach face, and what are some other terms used to describe this zone?

8. A spit is really just a beach that is only attached to the shore at one end. What conditions are necessary for the formation of a spit?

9. Barrier islands are common along the Atlantic coast of the U.S. as far north as Massachusetts. Why are there almost none in the northeastern U.S. or along the coasts of New Brunswick, Nova Scotia, and Newfoundland?

10. This diagram represents an island on the central coast of B.C. that has experienced 140 m of isostatic rebound since deglaciation, and has also been affected by the global eustatic sea-level rise over the same period. The dashed line marks sea level during glaciation. How much higher or lower should that line be now?

11. If a dam were to be built on the Fraser River near Hope, what would be the long-term implications for beaches in the Vancouver area? Explain why.