The main topics of this chapter can be summarized as follows:

1. What are the oldest parts of Laurentia?

2. The five main geological regions of Canada are shown on this map. Name the regions A through E. 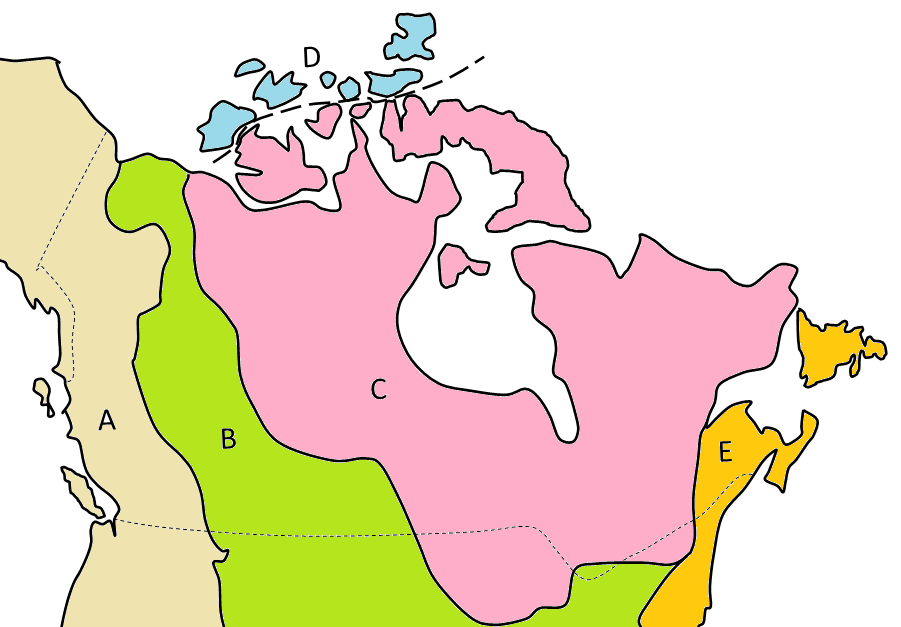 3. Which ancient continent collided with North America to form the Innuitian fold belt, and when did that take place?

4. Explain why the ancient sedimentary rocks of the Athabasca and Thelon Basins are generally unmetamorphosed and undeformed.

5. Explain why ultramafic intrusions, like those of the Muskox Intrusion, are relatively common in Archean rocks, but rare in Phanerozoic rocks.

6. Use the Internet to find out why Cambrian marine organisms are so well preserved in the rocks of the Burgess Shale of British Columbia.

8. What features of the Intermontane Superterrane have been used to indicate that these rocks formed south of the equator?

9. What is the connection between terrane accretion on the west coast and the relatively rapid accumulation of sediments within the WCSB?

10.Why is the WCSB considered to be a foreland basin during the Mesozoic?

11. The four main terranes of the Intermontane Superterrane are Cache Creek, Quesnel, Stikine, and Yukon-Tanana. Referring to Figure 21.14, determine the order in which these terranes are likely to have reached North America.

12. The presence of Nanaimo Group sedimentary rocks far inland and at relatively high elevations on Vancouver Island is attributed to the accretion of the Pacific Rim and Crescent Terranes. What is the likely connection?

13. Referring to the diagram in Exercise 21.5, explain why the Paskapoo Formation gets thinner toward the northeast.