2. How does elastic rebound theory help to explain how earthquakes happen?

4. What is an aftershock and what is the relationship between aftershocks and stress transfer?

5. Episodic slip on the middle part of the Cascadia subduction zone is thought to result in an increase in the stress on the upper part where large earthquakes take place. Why?

6. Explain the difference between magnitude and intensity as expressions of the size of an earthquake. 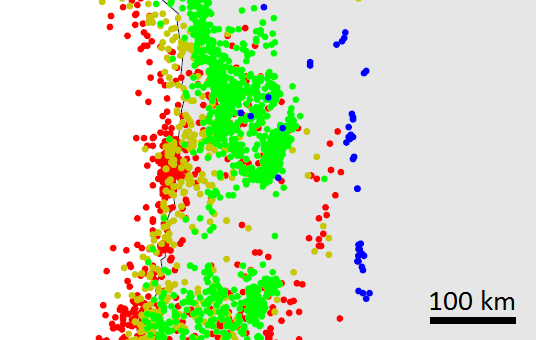 7. How much more energy is released by an M7.3 earthquake compared with an M5.3 earthquake?

8. The map shows earthquake locations with the depths coded according the colour scheme used in Figure 11.11. What type of plate boundary is this?

9. Draw a line on the map to show approximately where the plate boundary is situated.

10. In which directions are the plates moving, and where in the world might this be?

11. Earthquakes are relatively common along the mid-ocean ridges. At what type of plate boundary do most such quakes occur?

12. The northward motion of the Pacific Plate relative to the North America Plate takes place along two major transform faults. What are they called?

13. Why is earthquake damage likely to be more severe for buildings built on unconsolidated sediments as opposed to solid rock?

14. Why are fires common during earthquakes?

15. What type of earthquake is likely to lead to a tsunami?

16. What did we learn about earthquake prediction from the 2004 Parkfield earthquake?

17. What are some of the things we should know about an area in order to help minimize the impacts of an earthquake?

18. What is the difference between earthquake prediction and forecasting?