We examined the topography of the sea floor from the perspective of plate tectonics in Chapter 10, but here we are going to take another look at the important features from an oceanographic perspective. The topography of the northern Atlantic Ocean is shown in Figure 18.2. The important features are the extensive continental shelves less than 250 m deep (pink); the vast deep ocean plains between 4,000 and 6,000 m deep (light and dark blue); the mid-Atlantic ridge, in many areas shallower than 3,000 m; and the deep ocean trench north of Puerto Rico (8,600 m).

A topographic profile of the Pacific Ocean floor between Japan and British Columbia is shown in Figure 18.3. Be careful when interpreting this diagram (and others like it), because in order to show the various features clearly the vertical axis is exaggerated, in this case by about 200 times. The floor of the Pacific, like those of the other oceans, is actually very flat, even in areas with seamounts or deep trenches. The vast sediment-covered abyssal plains of the oceans are much flatter than any similar-sized areas on the continents.

The main features of the Pacific Ocean floor are the continental slopes, which drop from about 200 m to several thousand metres over a distance of a few hundred kilometres; the abyssal plains — exceedingly flat and from 4,000 m to 6,000 m deep; volcanic seamounts and islands; and trenches at subduction zones that are up to 11,000 m deep.

The continental shelf and slope offshore from Nova Scotia is shown in Figure 18.4. In this passive-margin area (no subduction zone), the shelf is over 150 km wide. On the Pacific coast of Canada, the shelf is less than half as wide. Continental shelves are typically less than 200 m in depth; 200 m is also the limit of the photic zone, the maximum depth to which sufficient light penetrates to allow photosynthesis to take place. As a result of that photosynthesis, the photic zone is oxygenated, and therefore suitable for animal life. Approximately 90% of marine life is restricted to the photic zone. The photic zone is also known as the epipelagic zone. The mesopelagic zone extends from 200 m to 1,000 m; the bathypelagic zone from 1,000 m to 4,000 m; and abyssalpelagic zone is deeper than 4,000 m.  (Pelagic refers to the open ocean, and thus excludes areas that are near to the shores or the ocean floor.)

Although the temperature of the ocean surface varies widely, from a few degrees either side of freezing in polar regions to over 25°C in the tropics, in most parts of the ocean, the water temperature is around 10°C at 1,000 m depth and about 4°C from 2,000 m depth all the way to the bottom.

The deepest parts of the ocean are within the subduction trenches, and the deepest of these is the Marianas Trench in the southwestern Pacific (near Guam) at 11,000 m (Figure 18.5). There are other trenches in the southwestern Pacific that are over 10,000 m deep; the Japan Trench is over 9,000 m deep; and the Puerto Rico and Chile-Peru Trenches are over 8,000 m deep. Trenches that are relatively shallow tend to be that way because they have significant sediment infill. There is no recognizable trench along the subduction zone of the Juan de Fuca Plate because it has been filled with sediments from the Fraser and Columbia Rivers (or their ancient equivalents).

This map shows a part of the sea floor.

(a) a continental shelf, (b) a continental slope, (c) a spreading ridge, (d) a subduction zone with a deep trench, (e) an abyssal plain, and (f) some isolated seamounts. 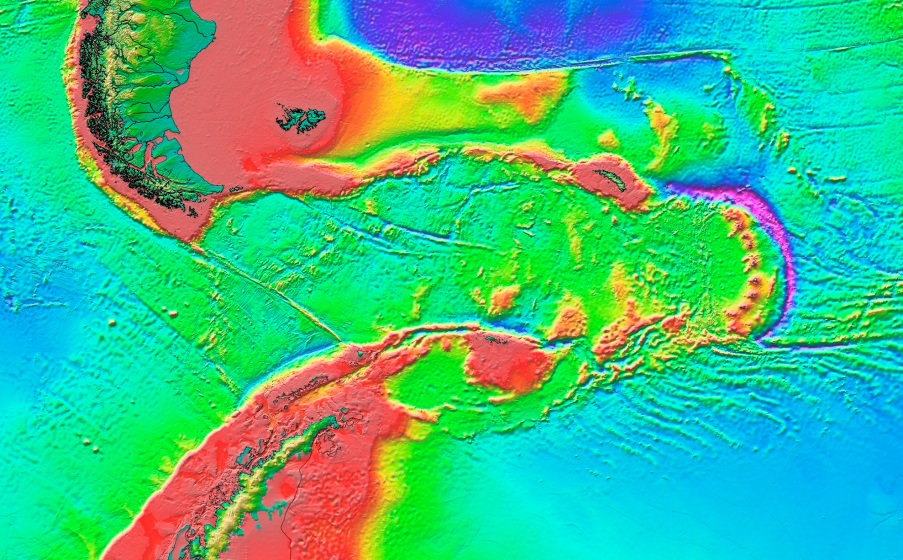