Figure 9.11 shows a typical temperature curve for the upper 500 km of the mantle, in comparison with the melting curve for dry mantle rock. Within the depth interval between 100 and 250 km, the temperature curve comes very close to the melting boundary for dry mantle rock. At these depths, therefore, mantle rock is either very nearly melted or partially melted. In some situations, where extra heat is present and the temperature line crosses over the melting line, or where water is present, it may be completely molten. This region of the mantle is known as the low-velocity zone because seismic waves are slowed within rock that is near its melting point, and of course it is also known as the asthenosphere. Below 250 km, the temperature stays on the left side of the melting line; in other words, the mantle is solid from here all the way down to the core-mantle boundary.

The fact that the temperature gradient is much less in the main part of the mantle than in the lithosphere has been interpreted to indicate that the mantle is convecting, and therefore that heat from depth is being brought toward the surface faster than it would be with only heat conduction. As we’ll see in Chapter 10, a convecting mantle is an essential feature of plate tectonics.

The convection of the mantle is a product of the transfer of heat from the core to the lower mantle. As in a pot of soup on a hot stove (Figure 9.12), the material near the heat source becomes hot and expands, making it lighter than the material above. The force of buoyancy causes it to rise, and cooler material flows in from the sides. The mantle convects in this way because the heat transfer from below is not perfectly even, and also because, even though mantle material is solid rock, it is sufficiently plastic to slowly flow (at rates of centimetres per year) as long as a steady force is applied to it.

As in the soup pot example, Earth’s mantle will no longer convect once the core has cooled to the point where there is not enough heat transfer to overcome the strength of the rock. This has already happened on smaller planets like Mercury and Mars, as well as on Earth’s Moon.

Why is the inside of Earth hot? 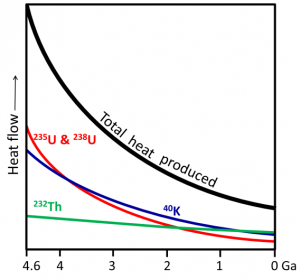 The heat of Earth’s interior comes from two main sources, each contributing about 50% of the heat. One of those is the frictional heat left over from the collisions of large and small particles that created Earth in the first place, plus the subsequent frictional heat of redistribution of material within Earth by gravitational forces (e.g., sinking of iron to form the core).

The other source is radioactivity, specifically the spontaneous radioactive decay of 235U, 238U, 40K, and 232Th, which are primarily present in the mantle. As shown on this figure, the total heat produced that way has been decreasing over time (because these isotopes are getting used up), and is now roughly 25% of what it was when Earth formed. This means that Earth’s interior is slowly becoming cooler.