As noted in the previous section, the types of magma produced in the various volcanic settings can differ significantly. At divergent boundaries and oceanic mantle plumes, where there is little interaction with crustal materials and magma fractionation to create felsic melts does not take place, the magma tends to be consistently mafic. At subduction zones, where the magma ascends through significant thicknesses of crust, interaction between the magma and the crustal rock — some of which is quite felsic — leads to increases in the felsic character of the magma.

From the perspective of volcanism there are some important differences between felsic and mafic magmas. First, as we’ve already discussed, felsic magmas tend to be more viscous because they have more silica, and hence more polymerization. Second, felsic magmas tend to have higher levels of volatiles; that is, components that behave as gases during volcanic eruptions. The most abundant volatile in magma is water (H2O), followed typically by carbon dioxide (CO2), and then by sulphur dioxide (SO2). The general relationship between the SiO2 content of magma and the amount of volatiles is shown in Figure 4.8. Although there are many exceptions to this trend, mafic magmas typically have 1% to 3% volatiles, intermediate magmas have 3% to 4% volatiles, and felsic magmas have 4% to 7% volatiles.

Differences in viscosity and volatile level have significant implications for the nature of volcanic eruptions. When magma is deep beneath the surface and under high pressure from the surrounding rocks, the gases remain dissolved. As magma approaches the surface, the pressure exerted on it decreases. Gas bubbles start to form, and the more gas there is in the magma, the more bubbles form. If the gas content is low or the magma is runny enough for gases to rise up through it and escape to surface, the pressure will not become excessive. Assuming that it can break through to the surface, the magma will flow out relatively gently. An eruption that involves a steady non-violent flow of magma is called effusive.

A good analogy for a magma chamber in the upper crust is a plastic bottle of pop on the supermarket shelf. Go to a supermarket and pick one up off the shelf (something not too dark). You’ll find that the bottle is hard because it was bottled under pressure, and you should be able to see that there are no gas bubbles inside. 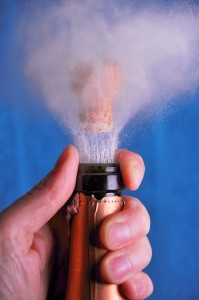 Buy a small bottle of pop (you don’t have to drink it!) and open it. The bottle will become soft because the pressure is released, and small bubbles will start forming. If you put the lid back on and shake the bottle (best to do this outside!), you’ll enhance the processes of bubble formation, and when you open the lid, the pop will come gushing out, just like an explosive volcanic eruption.

A pop bottle is a better analogue for a volcano than the old baking soda and vinegar experiment that you did in elementary school, because pop bottles, like volcanoes, come pre-charged with gas pressure. All we need to do is release the confining pressure and the gases come bubbling out.

If the magma is felsic, and therefore too viscous for gases to escape easily, or if it has a particularly high gas content, it is likely to be under high pressure. Viscous magma doesn’t flow easily, so even if there is a way for it to move out, it may not flow out. Under these circumstances pressure will continue to build as more magma moves up from beneath and gases continue to exsolve. Eventually some part of the volcano will break and then all of that pent-up pressure will lead to an explosive eruption.

Mantle plume and spreading-ridge magmas tend to be consistently mafic, so effusive eruptions are the norm. At subduction zones, the average magma composition is likely to be close to intermediate, but as we’ve seen, magma chambers can become zoned and so compositions ranging from felsic to mafic are possible. Eruption styles can be correspondingly variable.