7.4 Simplify and Use Square Roots

To start this section, we need to review some important vocabulary and notation.

Remember that when a number

is multiplied by itself, we can write this as

, which we read aloud as

Do you know why we use the word square? If we construct a square with three tiles on each side, the total number of tiles would be nine.

This is why we say that the square of three is nine.

is called a perfect square because it is the square of a whole number.

The chart shows the squares of the counting numbers

. You can refer to it to help you identify the perfect squares.

A perfect square is the square of a whole number.

What happens when you square a negative number?

The chart shows the squares of the negative integers from

Did you notice that these squares are the same as the squares of the positive numbers?

Sometimes we will need to look at the relationship between numbers and their squares in reverse. Because

. We can also say that

is a square root of

A number whose square is

is called a square root of

is a square root of

is also a square root of

are square roots of

So, every positive number has two square roots: one positive and one negative.

What if we only want the positive square root of a positive number? The radical sign,

is read as “the square root of

We can also use the radical sign for the square root of zero. Because

. Notice that zero has only one square root.

The chart shows the square roots of the first

Every positive number has two square roots and the radical sign indicates the positive one. We write

. If we want to find the negative square root of a number, we place a negative in front of the radical sign. For example,

Square Root of a Negative Number

Is there a number whose square is

. If we are asked to find the square root of any negative number, we say that the solution is not a real number.

a) There is no real number whose square is

is not a real number.

b) The negative is in front of the radical sign, so we find the opposite of the square root of

Square Roots and the Order of Operations

Notice the different answers in parts a) and b) of (Example 4). It is important to follow the order of operations correctly. In a), we took each square root first and then added them. In b), we added under the radical sign first and then found the square root. 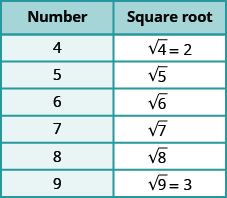 We might conclude that the square roots of numbers between

, and they will not be whole numbers. Based on the pattern in the table above, we could say that

Think of the perfect squares closest to

. Make a small table of these perfect squares and their squares roots.

Approximate Square Roots with a Calculator

Let’s see how we can use calculator to find the approximate square roots of those irrational numbers.

There are mathematical methods to approximate square roots, but it is much more convenient to use a calculator to find square roots. Find the

and it is read approximately.

Suppose your calculator has a

display. Using it to find the square root of

. This is the approximate square root of

. When we report the answer, we should use the “approximately equal to” sign instead of an equal sign.

. The square root of

is the example of irrational number and its approximation displays nine digits after the decimal place.

You will seldom use this many digits for applications in algebra. So, if you wanted to round

to two decimal places, you would write

How do we know these values are approximations and not the exact values? Look at what happens when we square them.

The squares are close, but not exactly equal, to

Expressions with square root that we have looked at so far have not had any variables. What happens when we have to find a square root of a variable expression?

. Can you think of an expression whose square is

Think about what we would have to square to get

Use Square Roots in Applications

As you progress through your college courses, you’ll encounter several applications of square roots. Once again, if we use our strategy for applications, it will give us a plan for finding the answer!

If the area of the square is

square units, the length of a side is

units. See the table below.

Mike and Lychelle want to make a square patio. They have enough concrete for an area of

square feet. To the nearest tenth of a foot, how long can a side of their square patio be?

We know the area of the square is

square feet and want to find the length of the side. If the area of the square is

square units, the length of a side is

Katie wants to plant a square lawn in her front yard. She has enough sod to cover an area of

square feet. To the nearest tenth of a foot, how long can a side of her square lawn be?

Sergio wants to make a square mosaic as an inlay for a table he is building. He has enough tile to cover an area of

square centimetres. How long can a side of his mosaic be?

Another application of square roots involves gravity. On Earth, if an object is dropped from a height of

feet, the time in seconds it will take to reach the ground is found by evaluating the expression

. For example, if an object is dropped from a height of

feet, we can find the time it takes to reach the ground by evaluating

seconds for an object dropped from a height of

feet to reach the ground.

Christy dropped her sunglasses from a bridge

feet above a river. How many seconds does it take for the sunglasses to reach the river?

A helicopter drops a rescue package from a height of

feet. How many seconds does it take for the package to reach the ground?

A window washer drops a squeegee from a platform

feet above the sidewalk. How many seconds does it take for the squeegee to reach the sidewalk?

feet, then the speed of the car can be found by evaluating

After a car accident, the skid marks for one car measured

feet. To the nearest tenth, what was the speed of the car (in mph) before the brakes were applied?

feet. To the nearest tenth, what was the speed of the car before the brakes were applied?

The skid marks of a vehicle involved in an accident were

feet long. To the nearest tenth, how fast had the vehicle been going before the brakes were applied?

The Links to Literacy activity “Sea Squares” will provide you with another view of the topics covered in this section.
ACCESS ADDITIONAL ONLINE RESOURCES

In the following exercises, simplify.

In the following exercises, estimate each square root between two consecutive whole numbers.

Approximate Square Roots with a Calculator

In the following exercises, use a calculator to approximate each square root and round to two decimal places.

In the following exercises, simplify. (Assume all variables are greater than or equal to zero.)

Use Square Roots in Applications

In the following exercises, solve. Round to one decimal place.

This chapter has been adapted from “Simplify and Use Square Roots” in Elementary Algebra (OpenStax) by Lynn Marecek and MaryAnne Anthony-Smith, which is under a CC BY 4.0 Licence. Adapted by Izabela Mazur. See the Copyright page for more information.

Introductory Algebra by Izabela Mazur is licensed under a Creative Commons Attribution 4.0 International License, except where otherwise noted.