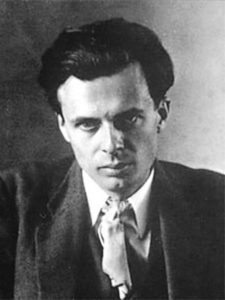 Aldous Huxley was descended from two eminent Victorian families—he was the grandson of noted biologist and writer on science, Thomas Henry Huxley, grandnephew of Matthew Arnold, and nephew of Victorian novelist Mary Augusta Ward (who wrote under her married name Mrs. Humphry Ward), Arnold’s niece. His unusual Christian name commemorates a major character, Aldous Raeburn, in the novel Marcella, which Mrs. Ward published in the year of Huxley’s birth, 1894.

Born in Godalming, Surrey, England, he received his first schooling from his mother, Julia Arnold Huxley. He then moved on to Hillside Preparatory School, Eton, and eventually, Balliol College, Oxford, taking a first in English in 1916. Two early blows—the death of his mother when he was only nine, and an attack of keratitis while he was a student at Eton, which left him nearly blind for the rest of his life—may have sharpened his tendency toward introversion. Certainly the latter affliction precluded a career in science, paving the way for a life in letters.

In the course of his long literary career, Aldous Huxley published poetry collections, plays, essays, short fiction, travel narratives, biography, and criticism, but, like George Orwell, author of Nineteen-Eighty-Four, he is best remembered as the author of a hugely influential utopian satire. Both men used the genre more than once. Brave New World began, like Orwell’s Coming Up for Air, as a response to H.G. Wells’s utopia, Men Like Gods (1923), and Huxley later wrote two more utopian-dystopian novels: Ape and Essence (1948) and Island (1962).

Although Huxley felt that he was not a “born novelist, but an essayist who writes novels,” he became an innovative fictional stylist, effectively using cinematic montage technique for the purpose of exposition in the third chapter of Brave New World, thereby sparing the reader from that major defect of most utopian novels—the tedious guided tour of utopian schools, hospitals, and factories. With his use of montage and intertextuality, Huxley did for the novel what Eliot had done for modern poetry in The Waste Land 10 years earlier. Like Eliot, Huxley often uses multiple references to canonical works. In Brave New World, his 50 allusions to Shakespeare help develop theme. He also incorporates ideas of fashionable Freudians, such as Ernest Jones and his interpretation of Hamlet to deepen the sense of the Savage’s sexual repression. At opportune moments, he echoes key lines from Gray’s “Elegy” and “Ode on a Distant Prospect of Eton” to underscore the ignorance-is-bliss theme and key images that recall the utilitarian schoolroom in Dickens’s Hard Times. Nor does he hesitate to use bathos: the deliberate contrasting of high culture with popular culture. Excerpts from fictional advertising jingles and popular 1920s-era romances, such as Elinor Glyn’s Three Weeks, satirize the contemporary lowering of musical and literary standards.

One notes a gradually emerging social conscience in Huxley at the time of his writing Brave New World. In fact, his satiric description of the reified workers in a dystopian factory was based on his visit to a Lucas automotive parts factory in Birmingham the previous spring.

In Brave New World, the novel’s most sympathetic character, Helmholtz Watson, like Wordsworth on Westminster Bridge, finds the silence of the sleeping metropolis to be eloquent: the very absence of the numinous in the wholly materialistic state begins, paradoxically, to suggest a presence. Watson is one of the first in what becomes a steady string of protagonists in his future novels who advocate what Huxley called “the great central technique, which traces the art of obtaining freedom from the fundamental human disability of egotism … repeatedly described by the mystics of all ages and countries.” His final utopian novel, Island (1962), is, in fact, Huxley’s final word on the subject of how to construct the good society. He died in Hollywood on November 22, 1963, the day President John F. Kennedy was assassinated.

Here is where you can read the full text of Brave New World.

Sir Thomas More coined the word “utopia” in his fictional work Utopia, first published in Latin in 1516. He created the word by combining the Greek prefixes “ou”and “eu” with the suffix “topos.” Define the two Greek prefixes and the Greek suffix, and then show how the concept of utopia is inherently playing with two different places.

[English translation: Utopias appear to be more realizable than we used to believe. And we now find ourselves facing a deeply troubling question: How to avoid their definitive realization? Life marches towards utopia. And maybe a new century will begin, a century where the intellectuals and cultivated classes will dream of ways to avoid utopias and to return to a non-utopian society, less perfect and more free.]

The essence of the conflict between John and Mond is whether happiness (Mond’s goal) is the chief goal in human society or whether it is some form of heightened consciousness/freedom for each person (John’s goal). Dostoeivsky used Satan’s triple temptation of Christ in the wilderness as his starting point. [See Matthew: ch. 4]

Ford, Henry. My Life and Work. 1922. Retrieved from http://onlinebooks.library.upenn.edu/webbin/gutbook/lookup?num=7213

This is a companion essay to Brave New World in which Huxley describes his visits to Alfred Mond’s chemical factory in the north of England, Imperial Chemical Industries (ICI), and to the Lucas Electrical Parts factory in Birmingham.

Primarily a historical approach to the novel.

Huxley reviewed this anti-communist book shortly before he wrote BNW. It is an important source for the satire on communism.

A short essay on the source of the name “Bokanovsky.” Click on “Notes and correspondence”

This paper discusses Huxley’s satire on communism and capitalism in the novel. It would be useful for research focusing on history and/or business.

Discusses the uses Huxley made of various sources, such as Shakespeare’s Othello and Elinor Glyn’s novel It.

A wide-ranging discussion of Huxley’s satire on the ideas of key figures in psychology.

This paper is quite wide-ranging but will be particularly helpful for students wanting to concentrate their research on biological aspects of the novel. N.B. Type “congdon” in author box once at the ESC site.

This paper by noted biologist Prof. Haldane, a friend of Huxley’s, discusses concepts such as ectogenesis and others topics central to Brave New World.

Huxley used some of the Smithsonian reports from Frank Cushing for background source material for Brave New World.

N.B. “Moki” was an early synonym for “Hopi”. Huxley read this pamphlet in 1930 before writing Brave New World. Despite his limited time visiting Aboriginal reservations in the U.S. states of Arizona and New Mexico, he was able to gain further background details for the “Savage Reservation” chapters in the novel by using this and other publications as source material. The Cushing, Hough and the Higdon essays are particularly useful for students wishing to do research with emphasis on Anthropology.

This will be useful for students wishing to focus on Chapters 16 and 17 in Brave New World, particularly the philosophy of the Grand Inquisitor.

As the title suggests, this essay discusses Brave New World within a context of previous utopian works, including Plato’s Republic. Click on “Notes and Correspondence” to download the article.