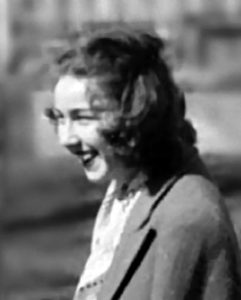 In 1925, Mary Flannery O’Connor was born in Savannah, Georgia. She lived there in the home where she was born until 1940. An Orthodox Catholic family, the O’Connors lived in Lafayette Square, a largely Catholic neighbourhood of Savannah, mainly through the generosity of her second cousin, Kate Semmes (whom O’Connor would call “Cousin Katie”). In 1936, O’Connor’s father, Edwin, was diagnosed with lupus and was hospitalized in Atlanta; his diagnosis would later force the family to leave Savannah. While Edwin sought treatment, Flannery and her mother, Regina, would often stay with family in Milledgeville.

In 1941, Edwin’s death would imprint itself on O’Connor, who was close with her father. Flannery and her mother subsequently moved to live at Andalusia, the maternal family farm in Milledgeville. After high school, O’Connor enrolled in Georgia State College for Women (now Georgia College & State University) in Milledgeville, where she completed a degree in English and sociology. After college, O’Connor enrolled in journalism school at the University of Iowa but, once there, enrolled in the Iowa Writers’ Workshop, where she was able to work with many of the most influential writers of her time.

At the Writers’ Workshop, O’Connor established herself as one of their most promising writers, winning a book contract, as well as a prestigious writer’s fellowship in New York. However, after being diagnosed with lupus in 1951, Flannery O’Connor returned to Andalusia, where she remained. At the age of twenty-five, she published her first novel, Wise Blood (1952), and followed it up with her first collection of short stories, A Good Man Is Hard to Find and Other Stories (1955). Her second published novel, The Violent Bear It Away (1960), was nominated for a National Book Award. Up until her death from lupus, at the young age of thirty-nine, she was working on her second collection of stories, Everything That Rises Must Converge (1965). In 1971, O’Connor’s friend and literary executor, Sally Fitzgerald, helped publish The Complete Stories, which won the National Book Award and was later awarded the Reader’s Choice Best of the National Book Awards (2010).

O’Connor’s fiction is famous for its Southern Gothic settings and her use of dark humour. Other themes in her fiction include the following her relationship with her mother, life at Andalusia, and her Orthodox Catholicism. “A Good Man is Hard to Find” is one of O’Connor’s most anthologized stories and one of her most violent. The story follows a family of six who, while on vacation to Florida, encounter The Misfit, a pensive, yet troubled serial killer, and one of O’Connor’s most famous characters. The Misfit states that his troubles centre on Christ’s claims of resurrecting the dead.

A Good Man Is Hard to Find

Please click the link below to access this selection, but before doing so, please read the epigraph that is deleted in the link to the story. It provides significant thematic context:

“The dragon is by the side of the road, watching those who pass. Beware lest he devour you. We go to the Father of souls, but it is necessary to pass by the Dragon.”

Full text of “A Good Man is Hard to Find” by Flannery O’Connor.

Read this interesting exchange between a college English professor and O’Connor:

A Professor of English had sent Flannery the following letter:

I am writing as spokesman for three members of our department and some ninety university stu­dents in three classes who for a week now have been discussing your story “A Good Man Is Hard to Find.” We have debated at length several possible interpreta­tions, none of which fully satisfies us. In general we believe that the appearance of The Misfit is not ‘real’ in the same sense that the incidents of the first half of the story are real. Bailey, we believe, imagines the appearance of The Misfit, whose activities have been called to his attention on the night before the trip and again during the stopover at the roadside restaurant. Bailey, we further believe, identi­fies himself with The Misfit and so plays two roles in the imaginary last half of the story. But we cannot, after great effort, determine the point at which reality fades into illusion or reverie. Does the accident literally occur, or is it a part of Bailey’s dream? Please believe me when I say we are not seeking an easy way out of our difficulty. We admire your story and have examined it with great care, but we are convinced that we are missing something important which you intended for us to grasp. We will all be very grateful if you comment on the interpretation which I have outlined above and if you will give us further comments about your intention in writing “A Good Man Is Hard to Find.”

To a Professor of English:

There is a change of tension from the first part of the story to the sec­ond where The Misfit enters, but this is no lessening of reality. This story is, of course, not meant to be realistic in the sense that it portrays the every­day doings of people in Georgia. It is stylized and its conventions are comic even though its meaning is serious.

Bailey’s only importance is as the grandmother’s boy and the driver of the car. It is the grandmother who first recognizes The Misfit and who is most concerned with him throughout. The story is a duel of sorts between the grandmother and her superficial beliefs and The Misfit’s more pro­foundly felt involvement with Christ’s action which set the world off bal­ance for him.

The meaning of a story should go on expanding for the reader the more he thinks about it, but meaning cannot be captured in an interpretation. If teachers are in the habit of approaching a story as if it were a research prob­lem for which any answer is believable so long as it is not obvious, then I think students will never learn to enjoy fiction. Too much interpretation is certainly worse than too little, and where feeling for a story is absent, theory will not supply it.

My tone is not meant to be obnoxious. I am in a state of shock.

There is no town called Timothy in Georgia. Some critics argue convincingly that St. Paul’s Epistle to Timothy in the New Testament is a key source for themes in this story. Have a look at the King James version of both 1 Timothy and 2 Timothy, especially 2 Timothy 1:5, and 3: 1–5. Do you agree?