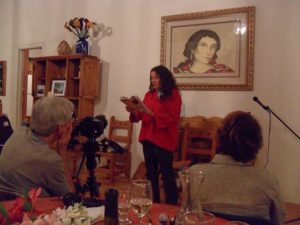 Leslie Marmon Silko was born in Albuquerque, New Mexico, but was raised in the outskirts of Old Laguna, a Pueblo village. Silko describes a lively childhood spent outdoors, one which included riding horses and hunting deer. Silko enjoys one-fourth Pueblo ancestry, and she also shares Mexican ancestry. Silko did not live on the Laguna Pueblo reservation, and Silko was not allowed to participate in many Pueblo rituals.

Through the fourth grade, she attended a Bureau of Indian Affairs (BIA) school, only to later commute to Manzano Day School, a Catholic private school in Albuquerque. After high school, Silko enrolled at the University of New Mexico, where she earned a bachelor’s degree in English. After college, Silko taught creative writing courses at the University of New Mexico before enrolling in their American Indian law program. As her literary career blossomed, Silko dropped out to focus on her writing. Silko would later spend several years as a professor of English and Creative Writing at the University of Arizona in Tucson, where she currently resides.

Silko’s first published short story, “The Man to Send Rain Clouds” (1969), was originally written for a class in college and was based around a similar autobiographic event. The story earned Silko a National Endowment for the Humanities Discovery Grant and, as Silko continued to publish, her literary reputation grew.

In 1974, her first book, Laguna Woman, featured a selection of Silko’s poems and short fiction; however, it was the emergence of her debut novel, Ceremony (1977), that brought her national recognition and established her as a prominent Native American writer. Since then, Silko has remained one of the most respected contemporary American writers: her short story and poetry collection, Storyteller (1981), was well-received and, in the same year, Silko was awarded the famed MacArthur Genius Grant. Her other novels include Almanac of the Dead (1991) and Gardens in the Dunes (1999).

In 1996, Silko published Yellow Woman and a Beauty of the Spirit, a collection of essays on Native American life. These essays discuss many contemporary issues relevant to Native Americans as well as her own reflections on her storytelling background and writing process.

Silko’s Native American heritage, especially her Pueblo upbringing, is a major thematic element that emerges within her writing regardless of its genre, be it poetry, fiction, or non-fiction. In “Yellow Woman,” a part of her Storyteller collection, Silko is able to merge traditional Pueblo legends with a contemporary tale. Part action/adventure story and part mythology, “Yellow Woman” seamlessly tells the tale of a narrator who may or may not be caught up in Laguna ancestral lore.

You can read it here: “Yellow Woman” by Leslie Marmon Silko [PDF].