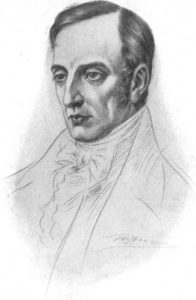 William Wordsworth was born on April 7, 1770, at Cockermouth in Cumbria in northeast England, near the Lake District, whose natural beauty would inspire many of Wordsworth’s poems. His mother died when he was just 8 and his father, a lawyer, died when Wordsworth was 13. The five Wordsworth children were scattered and spent their childhood with different relatives.

Wordsworth attended Cambridge University from 1787 to 1791. He studied French, and after he graduated, he went to France to gain fluency in the language. In Blois, he met Annette Vallon, whom he hoped to marry. They had a daughter, Caroline. Short of money, Wordsworth returned to England, planning to return to France as soon as he was able. But in the wake of the French Revolution, which Wordsworth ardently supported, and the subsequent leadership of Napoleon, England and France were at war. Wordsworth could not return and would not for many years.

In 1795, Wordsworth received a legacy from a close relative, and he and his sister Dorothy went to live in Dorset. Two years later they moved again, this time to Somerset, to live near Wordsworth’s dear friend and collaborator Samuel Taylor Coleridge. Together, they produced a collection of poems, Lyrical Ballads, published in 1798. It would prove to be a milestone in the history of English poetry, one of the books that ushered in the Romantic movement (from 1800 to 1850, approximately). Coleridge’s “The Rime of the Ancient Mariner” and Wordsworth’s “Tintern Abbey” are among the most famous poems in this collection.

With sufficient independent means, Wordsworth settled in to the life of a poet, gaining fame and recognition for his work over the years, culminating in 1842, when he was named England’s poet laureate. “Ode: Intimations of Immortality” and the autobiographical The Prelude are among his more famous long poems. He also wrote scores of much-loved short lyric poems and sonnets.

Wordsworth’s personal life was filled with joy and sorrow. In 1802, he married his childhood friend Mary Hutchinson and they settled into Dove Cottage in Grasmere in the Lake District and raised a happy family, which included the beloved aunt Dorothy. Unfortunately, over the years, he feuded with Coleridge, three of his children died, one of his brothers, a ship’s captain, was drowned at sea, and Dorothy suffered a mental breakdown. He was no longer the idealistic, radical young poet who supported the cries for social justice that sparked the French Revolution. His political views evolved, becoming increasingly conservative. He died on April 23, 1850.

I Wandered Lonely as a Cloud

I wandered lonely as a cloud
That floats on high o’er vales and hills,
When all at once I saw a crowd,
A host, of golden daffodils;
Beside the lake, beneath the trees,
Fluttering and dancing in the breeze.

Continuous as the stars that shine
And twinkle on the milky way,
They stretched in never-ending line
Along the margin of a bay:
Ten thousand saw I at a glance,
Tossing their heads in sprightly dance.

The waves beside them danced; but they
Out-did the sparkling waves in glee:
A poet could not but be gay,
In such a jocund company:
I gazed—and gazed—but little thought
What wealth the show to me had brought:

For oft, when on my couch I lie
In vacant or in pensive mood,
They flash upon that inward eye
Which is the bliss of solitude;
And then my heart with pleasure fills,
And dances with the daffodils.

What is the theme of this poem? The poet describes his appreciation—indeed, his awe—of nature’s beauty. Out on a walk one day, he sees a field of golden daffodils, seeming to stretch in a “never-ending line.” Here is a widely shared human experience, a common theme among poets. We have all been overwhelmed by nature’s beauty at some point in our lives. But note that Wordsworth takes the theme one step further. Experiences as significant as the one described in the poem have staying power. Days, month, years later, perhaps one day when we are simply resting on the couch, that image will flash across our minds—today, we might look at the picture we took with our cellphones—and we will experience again the serenity that natures beauty provides.

Now note the form of the poem. It consists of twenty-four lines, divided into four sections—that is, stanzas or verses—each six lines in length. Read the poem out loud, in a way that exaggerates its rhythm. You will note that each line has four stressed sounds or beats, preceded by a less stressed sound. To diagram this pattern, we assign a curved or a smile line to the less stressed beat and a slash to the stressed beat.

The stressed-unstressed unit is called an iamb. Because there are four iambs in each line, we designate the rhythm pattern of “I Wandered Lonely” as iambic tetrameter. There are four rhythm patterns in English poetry: iambic, trochaic, anapestic, and dactylic. A line of poetry will typically contain four (tetrameter) or five (pentameter) units, also called “beats” or “feet.” Examples of a variety of rhythm patterns are presented in this chapter.

Discerning poetry readers might notice that Wordsworth alters the iambic tetrameter rhythm in the last line of the first stanza, which would have to be scanned:

and, again, in the last line of the second stanza, which would be scanned:

Poets will sometimes alter their rhythm pattern to achieve a certain effect. The change in rhythm to describe the daffodils “fluttering” and “tossing their heads” accentuates the movement of the flowers, which so captured the poet’s attention.

Now note the words at the end of each line of each verse. The first and the third lines rhyme; the second and fourth lines rhyme; the final two lines rhyme. There is a pattern, a scheme to the rhyme. We illustrate this pattern by assigning small letters to words that rhyme. So the rhyme pattern or rhyme scheme of each stanza of “I Wandered Lonely” is ababcdcdee.

Note that each stanza of “I Wandered Lonely” forms a single sentence. Remember that the sentence and not the line is the unit of meaning in a poem. When you are reading a poem, pay attention to the punctuation, and discern the meaning of the complete sentence in poetry, not each individual line.

Wordsworth writes that the daffodils “stretched in never-ending line.” In reality, of course, the line ended, but the poet wants to stress that he was so overwhelmed by the multitude of the beautiful flowers that it seemed as if they never ended. He is using here a form of figurative language called hyperbole. Hyperbole is the use of exaggeration, not to deceive, but to achieve a poetic effect.

Wordsworth writes that the daffodils danced and tossed their heads. But they can’t dance, and they don’t have heads. Here the poet uses personification, which ascribes human characteristics to an object that is not human in order to achieve a poetic effect.

Embedded in the types of figurative language explained above and in other lines throughout the poem, Wordsworth appeals to our sense sight, helping us visualize his experience. We see the poet out on his country walk and, later, recalling his walk while resting on his couch. The daffodils dance and play, stars “twinkle on the milky way,” the waves along the margin of the bay sparkle. This is imagery, words in succession that arouse readers’ senses—the senses of sight and sound, especially, though sometimes also the senses of taste and touch.

There are other forms of figurative language besides the five referenced here (simile, metaphor, hyperbole, personification, and imagery). We will see examples of the others in our discussion of other poems.

“I Wandered Lonely as a Cloud” is based upon a true story which occurred on April 15, 1802.  Wordsworth and his sister Dorothy were taking a walk near Glencoyne Bay in England’s beautiful Lake District, where they lived. Dorothy kept a journal that describes the experience in language and detail similar to that Wordsworth uses in the poem. The Grasmere Journal was meant to be private, but it is of great value to English literary history, and it was published in 1897, about forty years after Dorothy’s death.