18 “How Do I Love Thee?” by Elizabeth Barrett Browning (Sonnet) 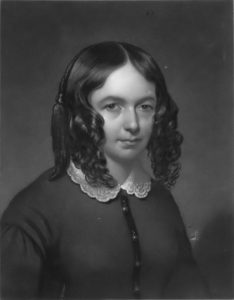 Elizabeth Barrett Browning was born March 6, 1806. Her father was wealthy, the owner of sugar plantations and other businesses in Jamaica. Throughout most of her childhood and young adulthood, Elizabeth lived with her family—she was the oldest of twelve children—on a magnificent estate near Ledbury, Herefordshire, in the southwest central part of England. She craved knowledge, reading voraciously and, with her brothers, attending lessons with well-qualified tutors. Before she was a teenager, Elizabeth was writing poetry. When she was a young teenager, she began to suffer intense headaches and spinal discomfort from a cause never really diagnosed. She spent most of her time indoors, reading and writing.

In the early 1830s, her father suffered a financial setback, in part because of new laws ending slavery. The family retained enough means to settle in a fine home on Wimpole Street in London. Elizabeth continued to write, and the high quality of her poetry brought her critical recognition and some financial success. By the time she was in her late 30s, Elizabeth was among the best-known and most highly respected poets in the country.

Her work drew the attention of another poet, Robert Browning, who eventually wrangled an invitation to visit. In May of 1845, they met and fell in love. Elizabeth began to write a series of sonnets, among the most famous in English literary history, celebrating her love for Robert. To be together, they had to to elope. Elizabeth’s father, devoted insofar as he encouraged and supported her education and literary talent, was eccentrically opposed to Elizabeth’s marriage, indeed, to marriage of any of his children.

The couple moved to Florence, Italy, where they settled into the happy life of two writers who still had enough independent means to live well enough to have the freedom to devote themselves to their work. When William Wordsworth died in 1850, Elizabeth came close to becoming British Poet Laureate, barely losing out to Alfred Tennyson. In Italy, her health improved, though she still used laudanum, a derivative of heroin, to control her pain and elevate her mood. At age 43, she gave birth to a son, Robert, whom they always called Pen. Throughout her life, she was an advocate for social justice, opposing slavery and child labour in “The Cry of the Children”; championing women’s rights, in her verse novel Aurora Leigh; and supporting Italy in its campaign for independence from Austria.

How Do I Love Thee?

The theme of Barrett Browning’s poem is that true love is an all-consuming passion. The quality of true love the poet especially stresses is its spiritual nature. True love is an article of faith. References to “soul,” “grace,” “praise,” “faith,” “saints,” and “God” help create this impression. The last line confirms the power of true love, asserting as it does that it is eternal, surviving even death.

“How Do I Love Thee” is a sonnet. A sonnet is a form of regular verse, so it will have a regular rhythm pattern and rhyme scheme. The rhythm pattern, as it is for most sonnets, is iambic pentameter, five beats of an unstressed then stressed sound in each line:

The rhyme scheme is abbaabba cdcdcd. Note that some of the rhymes are not absolute: ways/grace, for example, and faith/breath. These are called half-rhymes and they are included in the assessment of the rhyme scheme.

Note that the rhyme scheme divides the poem into two parts. The abbaabba part is called the octave (octave for eight) and the cdcdcd section is called the sestet (sestet for six). This is a distinctive sonnet pattern, called the Petrarchan sonnet, named after the Italian poet Francesco Petrarch, who first used the form in the fourteenth century. It is a common pattern in English poetry. The other common pattern is the Shakespearean sonnet, examples of which we will read later in the chapter.

Barrett Browning uses hyperbole throughout the poem to underscore the intensity of her love. She uses clever similes to the same effect, asserting that she loves as intensely as the free man determined to champion all that is right (line 7); as purely as the pious man at prayer (line 8). Almost half of the lines in the sonnet begin with the sentence “I love thee,” which reads like a mantra that reinforces the spiritual connection she feels.

Elizabeth Barrett met Robert Browning in May of 1845, and they married in September of 1846.  During their courtship, Elizabeth wrote a series of forty-five sonnets expressing her love for her fiancé. When she showed them to Robert, he recognized their brilliance and encouraged her to publish them in her next volume of poems, which came out in 1850. They did realize such an intensely emotional and personal expression of love might make the Victorian English uneasy, and so the poems were published under the title Sonnets from the Portuguese, to make it seem as if they were translations. “How Do I Love Thee?” is Sonnet 43. The deception was soon uncovered, and Barrett Browning’s sonnet sequence came to be revered, second only to Shakespeare’s, in English literary history.