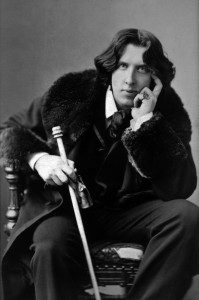 Oscar Wilde, the son of an eminent Dublin surgeon, stands out among the fraternity of Victorian dramatists, which includes fellow-Irishman Dion Boucicault (1820–1890), James Robinson Planché (1796–1880), Tom Robertson (1829–1871), Tom Taylor (1817–1880), W.S. Gilbert (1836–1911), and Arthur Wing Pinero (1859–1934). After studying at Trinity College, Dublin, Wilde attended Magdalen College, Oxford, where as a disciple of Walter Pater, he participated in the Aesthetic Movement, which advocated “art for art’s sake.” His aesthetic idiosyncrasies (such as his wearing his hair long, dressing colourfully, and carrying flowers while lecturing) were parodied by Gilbert and Sullivan in their operetta Patience (1881), for which Wilde acted as a “front man” by delivering lectures on aestheticism in advance of the road tour of the operetta.

After his marriage to Constance Lloyd in 1884, Wilde published several children’s books, and in 1891 the tale of a hedonistic Adonis with the tormented soul of a satyr, The Picture of Dorian Gray. In a brilliant series of domestic comedies — Lady Windermere’s Fan (1892),  A Woman of No Importance (1893), and An Ideal Husband (1894) — Wilde took the London stage by storm with his witty, epigrammatic style, insolent ease of utterance, and suave urbanity. Wilde described Lady Windermere’s Fan as “one of those modern drawing-room plays with pink lampshades.” Its combination of polished social drama and corruscatingly witty dialogue was repeated in 1895 in the two hits that he had on the London stage simultaneously, An Ideal Husband and The Importance of Being Earnest.

Later that same year, Wilde’s tragic downfall was precipitated by an accusation of homosexuality by the Marquis of Queensbury, father of Wilde’s intimate, Lord Alfred Douglas. The irate peer left a card at Wilde’s club addressed thus: “To Oscar Wilde posing as a Somdomite” (sic). Wilde, taking it that the writer meant “Sodomite,” made the catastrophic error of deciding to sue the peer for libel. After a sensational trial, Wilde was sentenced to two years hard labour for homosexual practices. Sent to Wandsworth Prison in November 1895, Wilde was subsequently transferred to Reading Gaol. Bankrupt and ruined in health, Wilde left prison in 1897 and settled, bitter and broken, in Paris under the pseudonym Sebastian Melmoth (the name of his favourite martyr from Melmoth the Wanderer, a novel written by his great-uncle, Charles Maturin, in 1820).

I never saw a man who looked
With such a wistful eye
Under the little tent of blue
Which prisoners call the sky.

All that we know who lie in gaol
Is that the wall is strong;
And that each day is like a year,
A year whose days are long.

The Importance of Being Earnest

Here is where you can read the full text: The Importance of Being Earnest.