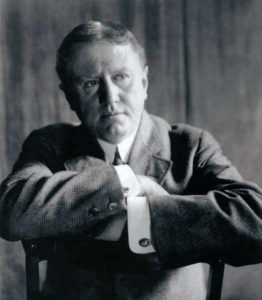 William Sidney Porter (who wrote under his pen name, O. Henry) was born on September 11, 1862, in Greensboro, North Carolina. When William was three, his mother died, and he and his physician father moved into the home of his paternal grandmother. As a child, Porter read widely. Until he turned fifteen, he received tutoring from his aunt, and by the age of nineteen, he was licensed as a pharmacist.

For health reasons, in 1882, Porter moved to Texas, where he became a ranch hand and his health improved. In 1884, he travelled to Austin, Texas, where he stayed for a number of years. He spent some time again working as a pharmacist and began writing on the side.

In 1887, Porter eloped with Athol Estes, who had been ill with tuberculosis. Two years later, she gave birth to a daughter.

Porter later began working at the First National Bank of Austin as a teller and bookkeeper, and in 1894, he was accused by the bank of embezzlement and lost his job, but he was not indicted at the time.

Porter’s father-in-law posted bail to keep him out of jail. He was due to stand trial on July 7, 1896, but the day before, as he was changing trains to get to the courthouse, he fled to New Orleans and later to Honduras, with which the United States had no extradition treaty. Porter had sent Athol and Margaret back to Austin to live with Athol’s parents. Athol became too ill to meet Porter in Honduras as he had planned. When he learned that his wife was dying, Porter returned to Austin in February 1897 and surrendered to the court, pending trial. Athol Estes Porter died from tuberculosis on July 25, 1897.

Found guilty on February 17, 1898, of embezzling $854.08, he was sentenced to five years in prison at the Ohio Penitentiary in Columbus. Porter was a licensed pharmacist and was able to work in the prison hospital as the night druggist. He was given his own room in the hospital wing, and there is no record that he actually spent time in the cell block of the prison. He had fourteen stories published under various pseudonyms while he was in prison but was becoming best known as “O. Henry,” a pseudonym that first appeared over the story “Whistling Dick’s Christmas Stocking” in the December 1899 issue of McClure’s Magazine. A friend of his in New Orleans would forward his stories to publishers so that they had no idea that the writer was imprisoned.

Porter was released on July 24, 1901, for good behaviour after serving three years. He reunited with his daughter Margaret, now age 11, in Pittsburgh, where Athol’s parents had moved after Porter’s conviction. Margaret was never told that her father had been in prison—just that he had been away on business.

Porter’s most prolific writing period started in 1902, when he moved to New York City to be near his publishers. While there, he wrote 381 short stories. He wrote a story a week for over a year for the New York World Sunday Magazine. His wit, characterization, and plot twists were adored by his readers but often panned by critics.

Porter married again in 1907 to his childhood sweetheart Sarah Lindsey Coleman, whom he met again after revisiting his native state of North Carolina. Sarah Lindsey Coleman was herself a writer and wrote a romanticized and fictionalized version of their correspondence and courtship in her novella Wind of Destiny.

Cabbages and Kings (1904) was his first collection of stories, followed by The Four Million (1906), whose title is something of a rebuke to a prominent society journalist. In the book’s preface, Porter criticized the journalist’s “assertion that there were only ‘Four Hundred’ people in New York City who were really worth noticing. But a wiser man has arisen—the census taker—and his larger estimate of human interest has been preferred in marking out the field of these little stories of the ‘Four Million.'” To O. Henry, everyone in New York counted.

The policeman on the beat moved up the avenue impressively. The impressiveness was habitual and not for show, for spectators were few. The time was barely 10 o’clock at night, but chilly gusts of wind with a taste of rain in them had well nigh de-peopled the streets.

Trying doors as he went, twirling his club with many intricate and artful movements, turning now and then to cast his watchful eye adown the pacific thoroughfare, the officer, with his stalwart form and slight swagger, made a fine picture of a guardian of the peace. The vicinity was one that kept early hours. Now and then you might see the lights of a cigar store or of an all-night lunch counter; but the majority of the doors belonged to business places that had long since been closed.

When about midway of a certain block the policeman suddenly slowed his walk. In the doorway of a darkened hardware store a man leaned, with an unlighted cigar in his mouth. As the policeman walked up to him the man spoke up quickly.

“It’s all right, officer,” he said, reassuringly. “I’m just waiting for a friend. It’s an appointment made twenty years ago. Sounds a little funny to you, doesn’t it? Well, I’ll explain if you’d like to make certain it’s all straight. About that long ago there used to be a restaurant where this store stands—’Big Joe’ Brady’s restaurant.”

“Until five years ago,” said the policeman. “It was torn down then.”

The man in the doorway struck a match and lit his cigar. The light showed a pale, square-jawed face with keen eyes, and a little white scar near his right eyebrow. His scarfpin was a large diamond, oddly set.

“Twenty years ago to-night,” said the man, “I dined here at ‘Big Joe’ Brady’s with Jimmy Wells, my best chum, and the finest chap in the world. He and I were raised here in New York, just like two brothers, together. I was eighteen and Jimmy was twenty. The next morning I was to start for the West to make my fortune. You couldn’t have dragged Jimmy out of New York; he thought it was the only place on earth. Well, we agreed that night that we would meet here again exactly twenty years from that date and time, no matter what our conditions might be or from what distance we might have to come. We figured that in twenty years each of us ought to have our destiny worked out and our fortunes made, whatever they were going to be.”

“It sounds pretty interesting,” said the policeman. “Rather a long time between meets, though, it seems to me. Haven’t you heard from your friend since you left?”

“Well, yes, for a time we corresponded,” said the other. “But after a year or two we lost track of each other. You see, the West is a pretty big proposition, and I kept hustling around over it pretty lively. But I know Jimmy will meet me here if he’s alive, for he always was the truest, stanchest old chap in the world. He’ll never forget. I came a thousand miles to stand in this door to-night, and it’s worth it if my old partner turns up.”

The waiting man pulled out a handsome watch, the lids of it set with small diamonds.

“Three minutes to ten,” he announced. “It was exactly ten o’clock when we parted here at the restaurant door.”

“Did pretty well out West, didn’t you?” asked the policeman.

“You bet! I hope Jimmy has done half as well. He was a kind of plodder, though, good fellow as he was. I’ve had to compete with some of the sharpest wits going to get my pile. A man gets in a groove in New York. It takes the West to put a razor-edge on him.”

The policeman twirled his club and took a step or two.

“I’ll be on my way. Hope your friend comes around all right. Going to call time on him sharp?”

“I should say not!” said the other. “I’ll give him half an hour at least. If Jimmy is alive on earth he’ll be here by that time. So long, officer.”

“Good-night, sir,” said the policeman, passing on along his beat, trying doors as he went.

There was now a fine, cold drizzle falling, and the wind had risen from its uncertain puffs into a steady blow. The few foot passengers astir in that quarter hurried dismally and silently along with coat collars turned high and pocketed hands. And in the door of the hardware store the man who had come a thousand miles to fill an appointment, uncertain almost to absurdity, with the friend of his youth, smoked his cigar and waited.

About twenty minutes he waited, and then a tall man in a long overcoat, with collar turned up to his ears, hurried across from the opposite side of the street. He went directly to the waiting man.

“Is that you, Bob?” he asked, doubtfully.

“Is that you, Jimmy Wells?” cried the man in the door.

“Bless my heart!” exclaimed the new arrival, grasping both the other’s hands with his own. “It’s Bob, sure as fate. I was certain I’d find you here if you were still in existence. Well, well, well!—twenty years is a long time. The old restaurant’s gone, Bob; I wish it had lasted, so we could have had another dinner there. How has the West treated you, old man?”

“Bully; it has given me everything I asked it for. You’ve changed lots, Jimmy. I never thought you were so tall by two or three inches.”

“Moderately. I have a position in one of the city departments. Come on, Bob; we’ll go around to a place I know of, and have a good long talk about old times.”

The two men started up the street, arm in arm. The man from the West, his egotism enlarged by success, was beginning to outline the history of his career. The other, submerged in his overcoat, listened with interest.

At the corner stood a drug store, brilliant with electric lights. When they came into this glare each of them turned simultaneously to gaze upon the other’s face.

The man from the West stopped suddenly and released his arm.

“You’re not Jimmy Wells,” he snapped. “Twenty years is a long time, but not long enough to change a man’s nose from a Roman to a pug.”

“It sometimes changes a good man into a bad one,” said the tall man. “You’ve been under arrest for ten minutes, ‘Silky’ Bob. Chicago thinks you may have dropped over our way and wires us she wants to have a chat with you. Going quietly, are you? That’s sensible. Now, before we go on to the station here’s a note I was asked to hand you. You may read it here at the window. It’s from Patrolman Wells.”

The man from the West unfolded the little piece of paper handed him. His hand was steady when he began to read, but it trembled a little by the time he had finished. The note was rather short.

Bob: I was at the appointed place on time. When you struck a match to light your cigar I saw it was the face of the man wanted in Chicago. Somehow I couldn’t do it myself, so I went around and got a plain clothes man to do the job.

Please watch the following short film adaptation, produced in 2016 by an Indian production company. It soon becomes clear that the actors are not Americans, but Indians. Does this fact lessen your appreciation of the film? Discuss the effectiveness of the setting, the soundtrack, and the lighting. Watch the short film adaptation of O. Henry’s “After Twenty Years”.

O. Henry (1862–1910) by James Sexton and Derek Soles is licensed under a Creative Commons Attribution-ShareAlike 4.0 International License, except where otherwise noted.