22 “One Art” by Elizabeth Bishop (Villanelle) 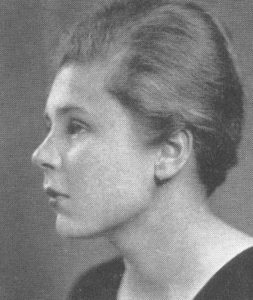 Elizabeth Bishop was born on February 8, 1911, in Worcester, Massachusetts. Her father was a prosperous building contractor, but he died while Elizabeth was still an infant. He left enough of a legacy so his daughter, when she came of age, would be free to travel widely and pursue her work as a poet. Elizabeth’s mother, devastated by her husband’s death, broke down emotionally and had to be institutionalized.

Elizabeth was sent to live with her mother’s family in Nova Scotia. She was happy there, but her father’s family was wealthy enough to effect Elizabeth’s return to Massachusetts to live with them. She was less happy there, and she was sent off again, this time to live with her mother’s sister, who encouraged her love of reading, her interest in poetry, especially. Her health was never robust; she would suffer from asthma all her life. But she was always a good student, and in 1934, she graduated from Vassar.

She travelled widely—France, Spain, Africa, Italy—then settled for a time in Key West, where she transformed her travel memories into poetry: North & South was published in 1946. Her famous and much anthologized poem “The Fish” is included in this volume. She would return to Florida often throughout her life.

Bishop moved to New York, the best city for networking and for making the contacts a poet needed, where she would live until 1951. The poets Marianne Moore (1887–1972) and Robert Lowell (1917–1977) befriended her, offered her the emotional support she always needed, and helped her promote her work. Her next book, Poems: North & South. A Cold Spring, was published in 1955. It won the 1956 Pulitzer Prize for poetry.

By then, Bishop was living in Rio de Janeiro. She had left New York in the fall of 1951, planning a world tour. But in Rio, she caught up with Lota de Macedo Soares, whom she had met in New York.  They fell in love and lived together until 1967. Lota had an apartment in Rio and an estate near Petropolis, an enclave for wealthy Brazilians. For a time, Elizabeth thrived. Her health improved, and she controlled the heavy drinking that had plagued her all her adult life. Brazil’s natural beauty inspired her. She was never a prolific poet, but her third book, Questions of Travel, was published in 1965.

Lota was a landscape architect from a prominent Brazilian family. In 1961, she was commissioned to oversee the development of the lush gardens and buildings for Rio’s Flamengo Park, a massive project which consumed much of her time. She also became increasingly involved in Brazil’s frenetic politics. The intensity of her work strained her relationship with Elizabeth.

In 1965, Bishop took a teaching position at the University of Washington in Seattle. She returned to Brazil in the summer of 1966, hoping to recover her happy life there. It was not to be. Lota could not cope with the stress of her work, and she was furious to learn of Elizabeth’s relationship in Seattle with a young woman, Roxanne Cummings. Lota had to be hospitalized, as did Elizabeth, for mental exhaustion. In the summer of 1967, Elizabeth returned to New York. Feeling stronger, Lota joined her that autumn, hoping to revive the relationship. But she was still far from healthy. She took an overdose of sleeping pills the night she arrived, and died a few days later in September of 1967.

Elizabeth reunited with Roxanne and moved her—and her two-year-old son—to Brazil, hoping to resume there the semblance of a happy life she had enjoyed there once. But the relationship did not last; Roxanne and her son returned to Seattle. Elizabeth floundered, but was rescued again by Robert Lowell, who got her a teaching position at Harvard, where he was a distinguished professor.

Elizabeth rallied and wrote some of the finest poetry she had ever written, published in Geography III in 1977. At Harvard, she met the third love of her life, Alice Methfessel. They were happy enough together (except for one dramatic temporary breakup) until Elizabeth’s death in October of 1979.

“One Art” asserts that, over time, we can recover from the loss of an object or even the loss of a loved one. “The art of losing isn’t hard to master,” the poet says; practice by losing small objects, then build up to the loss of homeland, home, and loved ones.

The key question the poem raises is this: Is the poet sincere or disingenuous? Is she deceiving herself to mask the pain of heartache? Has she really recovered from the loss of the woman she loved? Her advice—that we should practice the art of losing to prepare ourselves for a big loss—seems counterintuitive. We do lose things we treasure and people we love, but it is hard to master loss.

On its surface, the theme of “One Art” is that with patience and practice, we can recover from loss. The deeper theme might be the reverse: the loss of love is a disaster for which there is little or no consolation.

The villanelle is not a form widely used by poets. Its subject is often personal and emotional. The controlled and rigid structure helps poets restrain the emotion that might otherwise become excessive.

The first phrase of the poem—“The art of losing”—is an oxymoron, a phrase that embeds a deliberate contradiction to achieve a literary effect. The speaker is deceiving herself, pretending she does not care about loss, and so she refers to it as an “art,” pretending to diminish the pain and frustration of loss.

In the fall of 1975, Bishop split up with her girlfriend, Alice Methfessel. They would reunite and remain together until Bishop’s death in 1979, but the split inspired “One Art.” The “you” of the final stanza is a reference to Alice.

The loss of the cities, countries, and even continents she alludes to in the poem remind readers of her extensive travels and long residence in Rio de Janeiro.