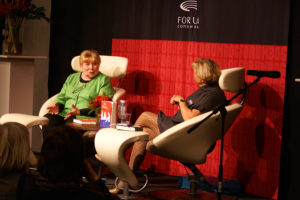 Fay Weldon was born Franklin Birkinshaw in Worcestershire, England, in 1931. Her mother was also a novelist, whose nom de plume, Pearl Bellairs, was taken from the name of a character in Aldous Huxley’s story “The Farcical History of Richard Greenow” (1920). Weldon is a prolific author of more than thirty novels, seven short story collections, seven works of non-fiction, and sixteen screenplays (including the prizewinning first episode of the acclaimed British television series Upstairs, Downstairs and a 1985 BBC adaptation of Pride and Prejudice).

Her work often deals with gender politics, and many of her novels treat the “condition of woman” theme, detailing the oppression of women, but she is often critical of some dogmatic feminist responses. Critic Lorena Russell observes that “her satire is marked by an ironic tone that questions social inequalities and their often irrational and unexpected consequences” (“Fay Weldon”, Encyclopedia of Twentieth Century Fiction, (Oxford: 2011), p. 380).

She lived in New Zealand until she was 15, when she returned to England with her mother and sister in 1946. In interviews and her memoir, Auto da Fay (2002), she recalls her early days in a household of women, and her new-found freedom upon entering the University of St Andrews in Scotland, where she studied psychology and economics and completed an M.A. in 1952 before she returned to reside in London. She became pregnant with her first child at age 22 but did not marry the child’s father. However, in 1957, tired of struggling to support herself as a single mother, she married a teacher 25 years her senior. They lived together in London for two years before the marriage dissolved.

She later became a copywriter in an advertising agency, earning enough to support herself and her son. In 1962, she married Ron Weldon and had three more sons. The couple later divorced, and she is currently married to poet Nick Fox.

One of her best-known novels, The Life and Loves of a She-Devil (1983), was made into a television film and a Hollywood movie, and like some of her other novels, it follows the trials of a betrayed wife.

You can read the full text here: “Weekend” by Fay Weldon [PDF].

Before you begin reading, please consider the following typographical corrections to the PDF:

Read this scholarly article on Weldon’s “Weekend”, which places the story in a feminist context.

Read Luke 10:41–42. In these lines, Christ rebukes Martha for occupying herself with household chores and for neglecting “the one thing needful,” unlike Martha’s sister Mary Magdalene, who sits and listens at Christ’s feet. Is there a character in the story who corresponds to Mary?

Click here for a photo and another biography of Fay Weldon.