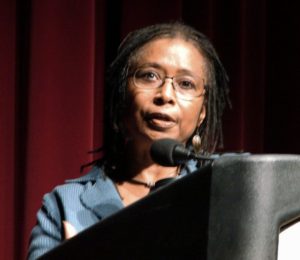 Born in Eatonton, Georgia, Alice Walker grew up in rural middle Georgia. Her father was a sharecropper, and her mother was a maid. Although they lived under Jim Crow laws in Georgia, in which African-Americans were discouraged from education, Walker’s parents turned her away from working in the fields, espousing instead the importance of education and enrolling her in school at an early age. Walker describes writing at the age of eight years old, largely as a result of growing up in what was a strong oral culture.

In 1952, Walker injured her eye after her brother accidentally shot her with a BB gun. Since the family did not have a car, it was a week before Walker received medical attention. By this time, she was blind in that eye, with scar tissue forming. As a result, Walker became shy and withdrawn, yet, years later, after the scar tissue healed, she became more confident and gregarious, graduating high school as valedictorian. Walker writes about this in her essay “Beauty: When the Other Dancer is the Self.”

Walker left Eatonton for Atlanta, attending Spelman College, a prestigious historically black college for women, and later received a scholarship to Sarah Lawrence College in New York. Walker considers her time in New York as critical for her development. While there, Walker became involved in the Black Arts Movement before her work in the civil rights movement brought her back to the South.

In 1969, Walker took a teaching position as writer-in-residence at Jackson State University in Jackson, Mississippi, before accepting the same position at Tougaloo College in Tougaloo, Mississippi. While there, she published her debut novel, The Third Life of Grange Copeland (1970). However, Walker soon returned to New York to join the editorial staff of Ms. magazine.

Her second novel, Meridian (1976), received positive reviews, but her third novel, The Color Purple (1982), perhaps best showcases her writing talents. This novel draws on some of Walker’s personal experiences as well as demonstrates Walker’s own creativity. For it, she won the National Book Award and the Pulitzer Prize. This novel was later adapted as a popular film. In addition to her engagement as an activist in many key issues, Walker has continued to write, publishing the famous book of essays, In Search of Our Mother’s Gardens (1983), as well as several other novels, such as Possessing the Secret of Joy (1992).

One theme that emerges in Walker’s work is acknowledging the contributions of often under-appreciated African-American writers, such as Zora Neale Hurston. Furthermore, Walker’s writing calls attention to the discrepancies in America’s treatment of African-Americans, while also acknowledging the importance of all Americans’ shared past. In the short story “Everyday Use,” we see many of these themes coalesce in the conflict between sisters Dee and Maggie. Although they are sisters, these two have very different lives, which leads to the central tension of the story—their argument over the quilt.

You can read the full text here: “Everyday Use” by Alice Walker [Full Text].

In small groups, research and define the term “satire” and discuss the elements of satire in “Everyday Use.”

In small groups (or in your journal), speculate on reasons why two siblings in the same family can be so different.

Watch a scene from a film adaptation of “Everyday Use”.