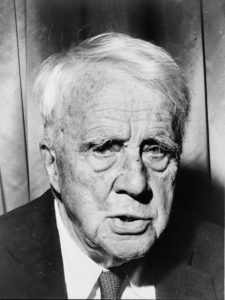 Robert Frost was born on March 26, 1874, in San Francisco. His father, a teacher and a journalist, died in 1885, and his mother, also a teacher, moved the family to Lawrence, Massachusetts, where the extended Frost family had settled generations ago. Frost graduated from Lawrence High School in 1892 and attended Dartmouth College briefly before returning to Lawrence to teach at his mother’s school and to answer his calling to become a poet. He married his high school sweetheart, Elinor White, in December of 1895.

Frost returned to university, this time to Harvard, where he was a student from 1897 to 1899. He left to work the farm his grandfather purchased for him in Derry, New Hampshire. From 1906 to 1911, he also taught high school and college English, mainly in Plymouth, New Hampshire. Throughout all of these years, he was writing poetry, but he was not having much success getting his work published.

In 1912, he took his family to England, hoping he would find more success there as a poet. His instincts proved to be exceptional. His first collection of poetry, A Boy’s Will, was published in England in 1913; his second, North of Boston, in 1914. Including such iconic Frost poems as “Mending Wall” and “After Apple-Picking” and his famous narrative “The Death of the Hired Man,” North of Boston established firmly Frost’s reputation.

The Frosts returned to America in 1915, to Franconia, New Hampshire, where the growing family bought another farm. His reputation was now established, and over the years, he would become a public figure, America’s best-known and most popular poet. He supplemented his income, in the manner typical of successful modern poets, by teaching and serving as poet-in-residence at a number of universities, including the University of Michigan and Amherst and Middlebury Colleges.

Frost’s professional success is unmatched by any other American poet. He won four Pulitzer Prizes for outstanding poetry: for New Hampshire, in 1924; Collected Poems, in 1931; A Further Range, in 1937; and A Witness Tree, in 1943. The world’s great universities—Harvard, Princeton, Oxford, Cambridge, Dartmouth—gave him honorary degrees. In 1960, he was awarded the Congressional Gold Medal for his contribution to American culture.

This professional success was tempered by tragedy in his personal life. His wife died of cancer in 1938. Four of his six children died before he did, his son Carol as a result of suicide. The contemplative and sorrowful voice of much of his poetry is the result, in part, of these events.

Frost was invited to read a poem at the inauguration of President Kennedy, on January 20, 1961. He was 87. He had written a poem especially for this occasion, but the glare from the sun on his paper obscured his vision. Instead, he recited from memory “The Gift Outright,” his iconic poem about America’s progress from a colony of Great Britain to an independent nation.

Frost died from complications of prostate surgery on January 29, 1963.

The poem is set in the wake of an ice storm that has bent the branches of the birch trees in the woods near the poet’s farm. The poet notices the bent branches, knows they are the victims of the ice storms, but wishes they were bowed down because a young boy has been swinging on them. The poem suggests that, through the exercise of our imagination, we can turn an unpleasant experience into a pleasant one. He knows he is deceiving himself. He can’t escape the “Truth,” capitalized, in line 20. But he is grateful for the temporary escape from the harsh realities of life his play provides.

There is a religious dimension to the theme of the poem. In line 13, the poet imagines “the inner dome of heaven had fallen,” as the ice crystals fall from the branches. In line 56, he climbs the birches “Toward [italicized] heaven.” But Earth is better, “the right place for love” (line 52). Ultimately, the theme of the poem is that it is great to imagine, but it is better to be grounded. It is restorative to escape from harsh reality, but ultimately, we must confront reality.

“Birches” is written in blank verse. Blank verse is a genre of poetry consisting of a regular rhythm pattern—iambic pentameter—but no recurring rhyme scheme.

It is a common and widely used verse form, revered because it is the form Shakespeare chose for his thirty-seven plays, though he does break the form on occasion in the interest of certain dramatic effects. It was also the form John Milton chose to use for the great epic poem in the English language, Paradise Lost.

Blank verse poems are usually quite long; at 59 lines, “Birches” is about average. They are often narrative poems in that they tell a story. Blank verse is the poetry genre that most closely resembles human speech, and so it lends itself to the narrative form. Blank verse poems often have a serious, philosophical tone or voice.

“Birches” is an example of an extended metaphor, in that tree climbing is associated with a temporary, restorative escape from harsh reality throughout the poem.

In lines 10 and 11, Frost uses a series of words that begin with “s” and “sh”: “Soon the sun’s warmth makes them shed crystal shells / Shattering and avalanching on the snow-crust—.” This repetition of a consonant sound to achieve a particular effect is called alliteration. The repetition, especially of the “sh” sound, mimics the sound of the ice crumbling from the branches and falling to the ground. The effect is aided by the repetition of the vowel sound “e” in “shed” and “shells” and the “a” sound in “shattering” and “avalanching.” This repetition of vowel sounds, a cousin to alliteration, is called assonance.

In line 19, Frost uses a simile, comparing the bowed branches to girls who dry their hair in the sun. The relationship between the human and the natural worlds is central to the theme of this poem, and this simile helps to augment this theme.

In line 21, Frost personifies Truth, breaking into his fantasy about the branches of the birch trees bowed down because boys have been swinging on them. Truth will triumph over fantasy by the end of the poem, and the personification highlight’s Truth’s strength.

The simile in line 44 draws an interesting comparison between life and “a pathless wood.” This is actually an example of an extended simile, since the comparison does not end until line 47. Those cobwebs that burn and tickle the face and those twigs that slash across the eyes are symbols that represent all of the physical and emotional challenges life sends our way.

“Birches” was written while Frost was living in England, in 1913–14. It was first published in the August 1915 edition of Atlantic Monthly, and it was included in his collection of poetry, Mountain Interval, published in 1916. Frost biographies note that the action in the poem is based upon Frost’s own adventures, climbing birch trees when he was a boy.