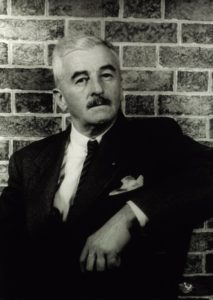 William Faulkner is the most important writer of the Southern Renaissance. Flannery O’Connor once compared the overpowering force of his influence to a thundering train, remarking that “nobody wants his mule and wagon stalled on the same track the Dixie Limited is roaring down.” Faulkner was born in Mississippi and raised on tales of his legendary great-grandfather, William Clark Falkner, the “Old Colonel” who led a group of raiders in the Civil War, built his own railroad, and was murdered by his former business partner, Richard Jackson Thurmond, the day after he was elected to the Mississippi legislature.

Dropping out of high school, Faulkner left Mississippi to pursue his interests in drawing and poetry. During the First World War, Faulkner pretended to be English in order to get around the height restriction in the U.S. Army and enlisted in the reserves of the British Army, although he never saw combat. He picked up his poetic career after the war, ultimately publishing his first book in 1924, a collection of poetry called The Marble Faun.

Turning his attention to fiction writing, Faulkner then wrote two timely novels. His first novel, Soldier’s Pay (1926), explores the states of mind of those who did and did not fight in the First World War. His second novel, Mosquitoes (1927), exposes the triviality of the New Orleans art community, of which Faulkner was briefly a part. However, it was with his third novel, Sartoris (1929), that Faulkner made what he called his “great discovery”: the fictional possibilities contained within his home state of Mississippi. Returning to Oxford, Mississippi, with his new wife, Faulkner moved into an antebellum mansion and began turning the tales he heard growing up about his hometown and surrounding area into one of the greatest inventions in American literary history: Yoknapatawpha County.

Faulkner eventually wrote thirteen novels, many of which were set in Yoknapatawpha County. Beginning with his fourth novel, The Sound and the Fury (1929), Faulkner began to incorporate modernist literary techniques such as stream-of-consciousness narration and non-linear plotting into his already lofty style. The Sound and the Fury describes the fall of the Compson family through four distinct psychological points of view, one of which is that of a young man who commits suicide, and another belonging to an illiterate who is severely mentally handicapped. As I Lay Dying (1930) describes the death and burial of a matriarch from the perspective of fifteen different characters in fifty-seven sections of often stream-of-consciousness prose.

In Absalom, Absalom! (1936), four narrators relate the same story yet also change it to arrive at four very different meanings. Modernist techniques such as these enabled Faulkner to dramatize how the particulars of everyday life in the rural American South show what he saw as the universal truths of humanity as a whole.

While stylistically modernist, Faulkner’s collective epic of Yoknapatawpha County ultimately explores not so much the future of narrative as the human condition itself as viewed through generation-spanning histories of great and low families.

One of Faulkner’s Yoknapatawpha stories is included here: “A Rose for Emily,” one of his many tales about the decline of formerly great Southern families. This short story is a good representative of both the range of Faulkner’s style and his ambition as a storyteller. In a deeply regional tale that is at once grotesque, tragic, brilliant, profound, loving, and hilarious, Faulkner leads us to the source, as he once put it, from which drama flows: “the problems of the human heart in conflict with itself.”

A Rose for Emily

You can read the full text here: A Rose for Emily [Full Text]

View the two-part film adaptation of “Barn Burning” from the 1977 American Short Story series on the Internet Archive, and then discuss how the ending differs from that of the print version of the story. Which ending do you think is the more effective?