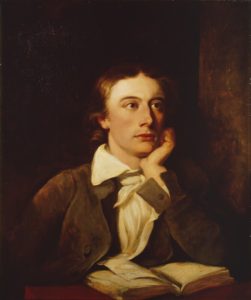 John Keats was born in London on October 31, 1795. His father helped manage businesses, an inn and a livery stable, owned by his father-in-law, John Jennings. His childhood was traumatized by the death of his father in a riding accident in April of 1804 and his mother’s hasty remarriage to William Rawlings, who replaced Keats’s father as the family property manager but not, apparently, as a responsible father figure. Conflicts over the dispersal of John Jennings’s considerable estate after his death broke the family apart and would plague Keats with financial problems all of his life, though his share of the estate, entangled in court proceedings, would have been considerable. Keats and his sister and two brothers went off to live with their grandmother.

Eventually, the family did reconcile, and Keats did well at John Clarke’s school in Enfield, where, despite his small size, he was an excellent athlete and a prizewinning student, popular with the other boys at the school. Tragedy struck again when Keats’s mother died in March 1810. Her mother appointed a family friend, Richard Abbey, executor of her estate.

Keats chose—or had chosen for him—medicine as his career. In the summer of 1810, he began work as apprentice to the family doctor, Thomas Hammond, and he was accepted into medical school at Guy’s Hospital in October of 1815. He did well, and in July of 1816, he earned the degree, which would qualify him to practice as a pharmacist, physician, and surgeon.

Keats continued his friendship with Charles Clarke, whose father was headmaster of the school they attended together. Clarke encouraged Keats’s budding interest in writing poetry, and he introduced Keats to the radical editor Leigh Hunt, with whom Clarke had shared some of Keats’s work.  Hunt was impressed, especially with the early sonnet “On First Looking into Chapman’s Homer,” written in October of 1816, after Clarke had loaned Keats George Chapman’s translation of Homer’s great epic poems, The Iliad and The Odyssey. Keats was a member now of the Hunt circle—he met poet Percy Shelley in December. Soon they were seen, justifiably so, as the rising starts of English poetry.

Abbey was, understandably, furious that Keats was giving up medicine to be a poet, especially given that the considerable expense of attending medical school would exacerbate Keats’s financial problems. Keats’s first book, simply titled Poems, appeared in March of 1817, but it was hardly a commercial success. He spent the next six months working on his long poem, Endymion, about the moon goddess Cynthia, who falls in love with the mortal shepherd Endymion and eventually assumes mortal shape herself so that they can be together. It was published in 1818 to indifferent reviews and poor sales. Still, Keats’s reputation was growing, and he was enjoying an active social life, travelling throughout the English countryside (on walking tours, mainly) and partying with a large group of London’s artists and poets, Shelley and Wordsworth among the most prominent.

In December of 1818, Keats’s brother Tom died of tuberculosis. His other brother, George, had immigrated to America, and Keats, always the responsible oldest brother, cared for Tom during his last days. The sorrow of Tom’s death coincided with some cruel reviews of Keats’s work, his continuing financial issues, and his own failing health, but his voluminous correspondence to his friends reveals the extent to which he was determined to keep his spirits up. A new relationship with his neighbour Frances Brawne helped him during this trying time.

Despite—perhaps because of—symptoms, which Dr. Keats recognized as the onset of tuberculosis, he worked with determined intensity, completing his great poems, including “The Eve of St. Agnes,” “Ode to a Nightingale,” “Ode on a Grecian Urn,” “La Belle Dame sans Merci,” and “To Autumn,” by the end of 1819. He became unofficially engaged to Fanny, to the consternation of her mother, who was doubtful of Keats’s prospects, and Keats’s friends, who did not warm to her. His final book (recognized now as a milestone of English poetry), Lamia, Isabella, The Eve of St. Agnes and Other Poems, was published in July 1820.

As his health continued to deteriorate, Keats sailed off to Italy with his close friend, the artist Joseph Severn, hoping the mild Italian climate would revive him. He saw Fanny for the last time in September of 1820. He lingered in Rome for some months before tuberculosis claimed him, as it had his brother and mother, in February of 1821.

Ode to a Nightingale

My heart aches, and a drowsy numbness pains
My sense, as though of hemlock[1] I had drunk,
Or emptied some dull opiate to the drains
One minute past, and Lethe[2]-wards had sunk:
‘Tis not through envy of thy happy lot,
But being too happy in thine happiness,—
That thou, light-winged Dryad[3] of the trees
In some melodious plot
Of beechen green, and shadows numberless,
Singest of summer in full-throated ease.

O, for a draught of vintage! that hath been
Cool’d a long age in the deep-delved earth,
Tasting of Flora and the country green,
Dance, and Provençal[4] song, and sunburnt mirth!
O for a beaker full of the warm South,
Full of the true, the blushful Hippocrene,[5]
With beaded bubbles winking at the brim,
And purple-stained mouth;
That I might drink, and leave the world unseen,
And with thee fade away into the forest dim:

Fade far away, dissolve, and quite forget
What thou among the leaves hast never known,
The weariness, the fever, and the fret
Here, where men sit and hear each other groan;
Where palsy shakes a few, sad, last gray hairs,
Where youth grows pale, and spectre-thin, and dies;[6]
Where but to think is to be full of sorrow
And leaden-eyed despairs,
Where Beauty cannot keep her lustrous eyes,
Or new Love pine at them beyond to-morrow.

Away! away! for I will fly to thee,
Not charioted by Bacchus[7] and his pards,
But on the viewless wings of Poesy,
Though the dull brain perplexes and retards:
Already with thee! tender is the night,
And haply the Queen-Moon is on her throne,
Cluster’d around by all her starry Fays[8];
But here there is no light,
Save what from heaven is with the breezes blown
Through verdurous[9] glooms and winding mossy ways.

I cannot see what flowers are at my feet,
Nor what soft incense hangs upon the boughs,
But, in embalmed darkness, guess each sweet
Wherewith the seasonable month endows
The grass, the thicket, and the fruit-tree wild;
White hawthorn, and the pastoral eglantine;
Fast fading violets cover’d up in leaves;
And mid-May’s eldest child,
The coming musk-rose, full of dewy wine,
The murmurous haunt of flies on summer eves.

Darkling[10] I listen; and, for many a time
I have been half in love with easeful Death,
Call’d him soft names in many a mused rhyme,
To take into the air my quiet breath;
Now more than ever seems it rich to die,
To cease upon the midnight with no pain,
While thou art pouring forth thy soul abroad
In such an ecstasy!
Still wouldst thou sing, and I have ears in vain—
To thy high requiem become a sod.

Thou wast not born for death, immortal Bird!
No hungry generations tread thee down;
The voice I hear this passing night was heard
In ancient days by emperor and clown:
Perhaps the self-same song that found a path
Through the sad heart of Ruth,[11] when, sick for home,
She stood in tears amid the alien corn;
The same that oft-times hath
Charm’d magic casements, opening on the foam
Of perilous seas, in faery lands forlorn.

Forlorn! the very word is like a bell
To toll me back from thee to my sole self!
Adieu! the fancy cannot cheat so well
As she is fam’d to do, deceiving elf.
Adieu! adieu! thy plaintive anthem fades
Past the near meadows, over the still stream,
Up the hill-side; and now ’tis buried deep
In the next valley-glades:
Was it a vision, or a waking dream?
Fled is that music:—Do I wake or sleep?

As the poem opens, the speaker expresses heartache and despair. He contrasts this with the summer song of the nightingale, whose happiness he envies. He wishes he had a magic potion that would transport him to the nightingale’s world, where he could forget about the trials and tribulations of his own life.

By virtue of his poetic imagination, the speaker does imagine he enters the nightingale’s magical world of tender nights, starry skies, and fragrant flowers. He is struck by the immortality of the nightingale’s song in contrast to his own mortality and dark thoughts. He hears the birdsong on this day and imagines Ruth of the Bible hearing it and remembering fondly her homeland.

He is jolted back to reality as the nightingale’s song fades away. He is left disoriented by the sensuous experience which has both pleased and confused him.

The theme of the poem is that nature’s beauty, represented by the nightingale’s song, can take us away from the harsh realities of life, but eventually, we will need to face and cope with them.

The poem is, as its title proclaims, an ode. An ode is a medium-length to long poem, ranging from about 36 to about 210 lines in length, formal in tone, and usually on a serious topic that has a philosophical slant to it. Odes tend to be in iambic pentameter and have regular rhyme schemes, but the ode form is determined by the author rather than prescribed.

“Ode to a Nightingale” is in iambic pentameter, with each of its eight ten-line stanzas using an ababcdecde rhyme scheme.

The nightingale’s song is a synecdoche, the use of a part to represent the whole. The famous aphorism “the pen is mightier than the sword” is built upon synecdoche, the pen representing the written word and the sword representing warfare. The nightingale’s song is a synecdoche for the beauty and the permanence of nature, in that Keats heard it and celebrated it in 1819; Ruth of the Bible heard it two thousand years ago; and we continue to hear it and marvel at it today.

Keats is a master of imagery, and sensuous images that help us see the poem’s beautiful settings and hear its beautiful music appear in every stanza. The latter half of stanza 4 and all of stanza 5, wherein Keats describes the imaginary world to which the nightingale’s song transported him, are especially effective. As we read the poem aloud, we can feel the tender night, see the bright moon, smell and hear, almost taste, the lush gardens, even though they are lit only by the moon. Alliteration and assonance support and feed the imagery.

In the spring of 1819, Keats was sharing a house with his friend Charles Brown.  The house was Wentworth Place, in Hampstead, a suburb of London. The house is now Keats House, a museum dedicated to John Keats. According to Brown, Keats was captivated by the song of a nightingale, which had nested in a plum tree—still there—in the garden. One morning, he sat under the plum tree for two or three hours and wrote the poem.