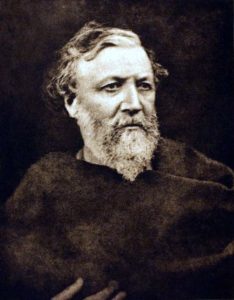 Robert Browning was born on May 7, 1812, in Camberwell, England. His mother was an accomplished pianist and a devout evangelical Christian. His father worked as a bank clerk and was also an artist, scholar, antiquarian, and collector of books and pictures. His rare book collection of more than 6,000 volumes included works in Greek, Hebrew, Latin, French, Italian, and Spanish. Much of Browning’s education came from his well-read father. It is believed that he was already proficient at reading and writing by the age of five. A bright and anxious student, Browning learned Latin, Greek, and French by the time he was fourteen. From fourteen to sixteen, he was educated at home, attended to by various tutors in music, drawing, dancing, and horsemanship.

At the age of twelve, he wrote a volume of Byronic verse entitled Incondita, which his parents attempted, unsuccessfully, to have published. In 1825, a cousin gave Browning a collection of Shelley’s poetry; Browning was so taken with the book that he asked for the rest of Shelley’s works for his thirteenth birthday, and declared himself a vegetarian and an atheist in emulation of the poet. Despite this early passion, he apparently wrote no poems between the ages of thirteen and twenty. In 1828, Browning enrolled at the University of London, but he soon left, anxious to read and learn at his own pace. The random nature of his education later surfaced in his writing, leading to criticism of his poems’ obscurities.

In 1833, Browning anonymously published his first major published work, Pauline, and in 1840, he published Sordello, which was widely regarded as a failure. He also tried his hand at drama, but his plays, including Strafford, which ran for five nights in 1837, and the Bells and Pomegranates series, were for the most part unsuccessful. Nevertheless, the techniques he developed through his dramatic monologues—especially his use of diction, rhythm, and symbol—are regarded as his most important contribution to poetry, influencing such major poets of the twentieth century as Ezra Pound, T.S. Eliot, and Robert Frost.

After reading Elizabeth Barrett’s Poems (1844) and corresponding with her for a few months, Browning met her in 1845. They were married in 1846, against the wishes of Barrett’s father. The couple moved to Pisa and then Florence, where they continued to write. They had a son, Robert “Pen” Browning, in 1849, the same year Browning’s Collected Poems was published. Elizabeth inspired Robert’s collection of poems Men and Women (1855), which he dedicated to her. Now regarded as one of Browning’s best works, the book was received with little notice at the time; its author was then primarily known as Elizabeth Barrett’s husband.

Elizabeth Barrett Browning died in 1861, and Robert and Pen Browning moved to London soon after. Browning went on to publish Dramatis Personae (1864), and The Ring and the Book (1868). The latter, based on a seventeenth century Italian murder trial, received wide critical acclaim, finally earning Browning renown and respect in the twilight of his career. The Browning Society was founded in 1881, and he was awarded honorary degrees by Oxford University in 1882 and the University of Edinburgh in 1884. Robert Browning died on the same day that his final volume of verse, Asolando, was published, in 1889.

That’s my last Duchess[2] painted on the wall,
Looking as if she were alive. I[3] call
That piece a wonder, now; Fra Pandolf’s[4] hands
Worked busily a day, and there she stands.
5Will’t please you sit and look at her? I said
“Fra Pandolf” by design, for never read
Strangers like you that pictured countenance,
The depth and passion of its earnest glance,
But to myself they turned (since none puts by
10The curtain I have drawn for you, but I)
And seemed as they would ask me, if they durst,
How such a glance came there; so, not the first
Are you to turn and ask thus. Sir, ’twas not
Her husband’s presence only, called that spot
15Of joy into the Duchess’ cheek; perhaps
Fra Pandolf chanced to say, “Her mantle[5] laps
Over my lady’s wrist too much,” or “Paint
Must never hope to reproduce the faint
Half-flush that dies along her throat.”[6] Such stuff
20Was courtesy, she thought, and cause enough
For calling up that spot of joy. She had
A heart—how shall I say?— too soon made glad,
Too easily impressed; she liked whate’er
She looked on, and her looks went everywhere.
25Sir, ’twas all one! My favour at her breast,
The dropping of the daylight in the West,
The bough of cherries some officious fool
Broke in the orchard for her, the white mule
She rode with round the terrace—all and each
30Would draw from her alike the approving speech,
Or blush, at least. She thanked men—good! but thanked
Somehow—I know not how—as if she ranked
My gift of a nine-hundred-years-old name
With anybody’s gift. Who’d stoop to blame
35This sort of trifling? Even had you skill
In speech—which I have not—to make your will
Quite clear to such a one, and say, “Just this
Or that in you disgusts me; here you miss,
Or there exceed the mark”—and if she let
40Herself be lessoned so, nor plainly set
Her wits to yours, forsooth,[7] and made excuse—
E’en then would be some stooping; and I choose
Never to stoop. Oh, sir, she smiled, no doubt,
Whene’er I passed her; but who passed without
45Much the same smile? This grew; I gave commands;
Then all smiles stopped together. There she stands
As if alive. Will’t please you rise? We’ll meet
The company below, then. I repeat,
The Count your master’s known munificence
50Is ample warrant that no just pretense
Of mine for dowry will be disallowed;[8]
Though his fair daughter’s self, as I avowed
At starting, is my object. Nay, we’ll go
Together down, sir. Notice Neptune,[9] though,
55Taming a sea-horse, thought a rarity,
Which Claus of Innsbruck[10] cast in bronze for me!

The Duke’s speech reveals his character, and from his character emerges the theme of the poem. The Duke’s late wife displeased him, because he thinks she took joy in the simple pleasures of life at the expense of the attention and reverence she should have granted exclusively to him and to his “nine-hundred-years-old name.” His last Duchess chatted with Fra Pandolf, who painted her portrait; she loved the sunset; she loved the bough of cherries the gardener brought her; she loved riding around the estate on her white mule. The Duke believes, on the basis of no evidence, that his Duchess flirted with men. And so he “gave commands / Then all smiles stopped together.” He has her executed. The Duke reveals himself to be pathologically jealous, a product of his own deep-seated insecurities. And herein lies the main theme of the poem: the destructive power of jealousy arising from an arrogance that masks low self-esteem.

This is a regular verse dramatic monologue, in rhyming couplet iambic pentameter.

The Duke comes across as a blunt, plain-spoken man, not one to use imagery or metaphor. The striking image of lines 18–19, noting that a painter would have trouble reproducing “the faint / Half-flush that dies along [the Duchess’s] throat,” is in the voice of the artist. It does foreshadow the Duchess’s fate.

The bronze sculpture of Neptune taming a sea horse, which the Duke points out to the Count’s ambassador before they rejoin the other guests, is a symbol of the control the Duke intends to exert upon his new bride. He has an ulterior motive in pointing out the statue.

Irony, as an element of literature, is a behaviour or an event which is contrary to readers’ or audience expectations. We say it is “ironic” when the Chief of Police is convicted of a crime. “My Last Duchess” rings with irony. The Duke condemns his wife’s behaviour but reveals her to be an innocent free spirit. He believes he is an honourable man, acting appropriately in the interest of preserving the integrity of his “nine-hundred-years-old name.” Readers soon understand the truth: the Duke is an insecure control freak and a murderer.

“My Last Duchess” was published in 1842, in Browning’s poetry collection Dramatic Lyrics. Browning was a student of the history, literature, and culture of Renaissance Italy, which is the poem’s setting, though he had not yet eloped with Elizabeth and settled with her in Italy.