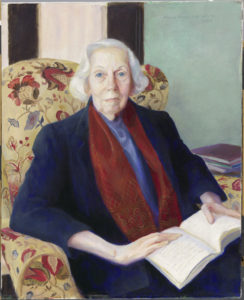 Eudora Alice Welty was born in Jackson, Mississippi, in 1909, the daughter of an insurance agent father and a retired teacher mother. Her family had moved to Mississippi from the Ohio Valley region, and Welty enjoyed an idyllic childhood spent in Mississippi with summers visiting relatives in the Midwest. While in high school, Welty published works in a national magazine before attending Mississippi State College for Women for an associate degree, then transferring to the University of Wisconsin in order to finish her degree in English. After earning that degree (1929), Welty enrolled at Columbia University but could not find full-time work in New York City during the depression. Due to finances, she returned home to Jackson (1931), where she would reside for the rest of her life.

Once home, Welty held a series of jobs to help support her mother, including working as a publicity agent for the Works Progress Administration (WPA). In 1936, Welty published her first short story, “The Death of a Traveling Salesman,” in Manuscript magazine. After this success, she continued to publish in many prominent journals and magazines, including Harper’s Bazaar and Atlantic Monthly. Her first collection of short stories, A Curtain of Green (1941), was largely well-received. Her follow-up novella, The Robber Bridegroom (1942), brought her national attention. Soon, Welty was receiving encouragement from fellow Mississippi native William Faulkner.

In both 1943 and 1944, Welty won the O. Henry Award, a prestigious award given for outstanding short fiction. Soon after, Welty would go on to write her classic, The Golden Apples (1949). After publishing The Bride of the Innisfallen and Other Stories (1955), Welty took a fifteen-year hiatus from writing fiction before returning with her novel, The Optimist’s Daughter (1972), which was awarded the Pulitzer Prize. In 1980, Welty was awarded the Presidential Medal of Freedom before publishing her bestselling autobiography, One Writer’s Beginnings. Welty died in Jackson, Mississippi, in 2001.

Although she won a Pulitzer Prize for her novel The Optimist’s Daughter, Welty is largely known as a master of short fiction. Her work engages Southern themes, often dealing with the problems of the post-Reconstruction South. “A Worn Path,” originally published in Atlantic Monthly, is one of Welty’s most famous and most anthologized short stories. It transposes the hero’s journey (a tale in which a hero sets off on an adventure and is changed at the end) on to a seemingly simple tale of an elderly African-American grandmother, Phoenix Jackson, retrieving medication for her sick grandson.

You can read the full text here: A Worn Path [Full Text]

In small groups, research together online the myth of the phoenix and discuss the relevance of the myth to the name of the story’s main character.